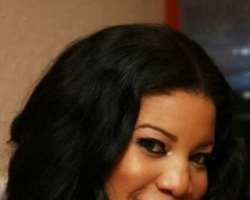 Few years after sexy actress Monalisa Chinda's marriage to Dejo Richard broke-up,she has on different occasions denied any link or connection with the opposite sex.

Nevertheless,those who are close to the light skinned Rivers State born filmmaker have not only confirmed that she has had some affiliations with different men,but has also been spotted in company of wealthy and good looking dudes at one point or the other.

Few weeks back at an event at Sheraton Hotel, Ikeja, she was spotted with a gorgeous dude.It was glaring that there was more than met the eyes in the way the two behaved and it is only the blind that would not conclude that the two of them have one or two things in common.

They were not only found together immediately the beautiful mother of one girl vacated her sitting position,but also she received and obeyed every instruction coming from him.

Aside that,the man was not ready to give Ms Chinda any breathing space as he followed and directed all her movements and statements to people.
Insiders equally revealed that she has tactfully unveiled the dude to her close pals as her fiancée.