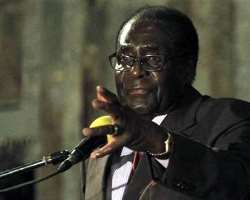 Zimbabwe's President Robert Mugabe could be barred from running for another term, according to the first draft of a new constitution that also seeks to trim presidential powers.

However, Mugabe, who has been accused by the West of using death squads and violence to intimidate voters, will probably muster his political might to sink the proposal, analysts said.

Mugabe, who has ruled the southern African country since independence from Britain in 1980, was forced into a power-sharing deal in 2008 after a disputed election and compelled to draft a new constitution.

"A person is disqualified for election as President if he or she has already held office for one or more periods, whether continuous or not, amounting to 10 years," according to the draft seen by Reuters.

Mugabe has been nominated as his ZANU-PF party's candidate and intends to run in an election he wants held in 2012. Under the power-sharing deal with his rival and now prime minister, Morgan Tsvangirai, elections must be held by next year with a new constitution drawn up ahead of the poll.

A referendum on the new constitution is expected to be held later this year.

Presidential powers, including the right to make senior appointments in government and the military, would be significantly curtailed, according to the draft.

Douglas Mwonzora, a co-chairman of the parliamentary committee driving the constitutional reforms representing Tsvangirai's MDC party, said the draft was the first of several that would be produced before the referendum.

The state-owned Herald newspaper, whose views often echo those of Mugabe's ZANU-PF party, denounced the proposal.

"The draft is personalised to attack President Mugabe. Here is a constitution being drafted...to disqualify the leader of one of the parties," it quoted an unnamed source as saying.