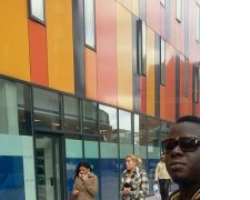 The wonder on the wheels costs the graduate of Computer Science, University of Benin, N3.1 million.

Elenu came to limelight after winning the 2006 edition of AY's Open Mic night comedy competition,and since then he has been very consistent.He has performed in major comedy concerts in and outside the country.