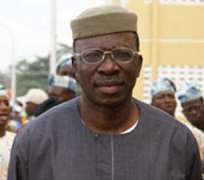 Some days ago, there were reports that the National Sports Commission (NSC) in Nigeria opened a Facebook page for 1.2million Naira.

This has raised dust and eyebrows among some Nigerians who felt disappointed at the news.

In a response to the criticism it has received over the issue, NSC released an official statement debunking spending N1.2m to open its Facebook page.

Below is the official statement.

The attention of the National Sports Commission has been drawn to posts on the Commission's Page alleging that the Commission spent the sum of N1.2m to open a Facebook Page. Nothing can be further from the truth. The truth of the matter is:

ii) During the course of briefing the immediate past Hon. Minister of Sports/Chairman, National Sports Commission, Alh. Yusuf Suleiman, he directed that a more aggressive approach be adopted in projecting the Facebook Page. The Hon. Minister (HM), who has a personal Facebook Page, also directed that the Facebook crew should accompany him to visit all the athletes and their coaches who were in various camps across the country in preparation for the 10th All Africa Games. Furthermore, he directed that the crew should attend the 10th AAG in Maputo to update the Page on happenings during the Games.

iii) Consequent upon the Hon. Minister's directives, a Memo dated August 2, 2011 seeking for N902,000.00 was approved for a two-man team to visit the various camps. This was to enable the crew interact directly with the athletes and their coaches and obtain firsthand information about them for Facebook Page.

iv) Following the directive of the HM to adopt a more aggressive approach in projecting the Facebook Page, it was decided at the ICT Unit level that the NSC Facebook Page should be advertised in Facebook. An initial sum of $200 was committed to this. This immediately translated to a tremendous increase in the followership of the NSC Facebook within one week.

v) It is no secret that Facebook Pages can either be used as:

a) a personal social interactive forum; or

b) a commercial tool to advertise goods and services, project a cause, draw awareness to products, canvass for followership, etc.

The Commission's Facebook Page was deployed for the second category, which naturally attracts advertisement costs. The creators of Facebook can be contacted on this.

vi) Furthermore, following the success of the advert, another memo dated August 26, 2011 for N300,000.00 was approved to step up and extend the advertisement of the Page, purchase Internet Modems with a one month additional subscription.

vii) We wish to state that:

a) Opening of Facebook pages does not attract any form of payment and the NSC Facebook Page was opened at no cost.

b) The initial $200 paid for advertisement was privately funded.

c) The sums of N902,000.00 and N300,000.00 were approved for the Facebook Page crew to accompany the HM on his visits to the various camps of athletes and their coaches and to purchase internet modems with additional one month subscription respectively. Of this amount, the sum of $1,000 (N160,000.00) was to advertise the NSC Facebook Page in Facebook and the Page was so advertised.

All the above can be verified.