THE ''CONVICTION'' OF AL MUSTAPHA-GOD IS NOT ASLEEP 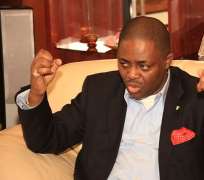 When I heard that Major Hamza Al Mustapha was convicted of murder and sentenced to hanging by a Lagos High Court yesterday afternoon I was utterly shocked, saddened and disgusted. And let me tell you why. I was one of those that opposed the late General Sani Abacha's government and fought against Al Mustapha and co. with every fibre of my being during the NADECO days. Given that, if anything, I should h...ave been rejoicing with the many other NADECO leaders, supporters and stalwarts who honestly believe that Al-Mustapha actually ordered the death of our wonderful heroine Alhaja Kudirat Abiola and who believe that he deserves to die as a consequence of it.

However I am not rejoicing with them simply because as far as I am concerned, based on the evidence that was adduced in court, this man had absolutely nothing to do with the killing of Kudirat Abiola. I believe that whatever we do we must always operate within the law and there is no place for the expression of unfettered emotions, vendetta or jungle justice in a civilised country when it comes to the administration of justice. I have been following this case closely for the last four years and I have publically called for the release of Al Mustapha on a number of occasions simply because I found it shameful and unjust that the state could lock up a man in a dungeon for 13 years without being able to prove a case against him.

By doing that they have already almost ruined his life yet there is a presumption of innocence in our law. Now the state has gone even a step further in this whole unsavoury and disgraceful episode and they have convicted a man to hang for something that he knew nothing about simply because they want to silence him and stop him from exposing the truth about the rolen that many of the high and mighty played in the death of Abacha, MKO Abiola and many others. They want to jail and kill Mustapha just as they have jailed and killed so many other innocent men that came before him. Let me make this clear- I hold no brief and I have no sympathy whatsoever for the Abacha government that Al-Mustapha served and neither do I seek to defend their actions whilst in office.

The truth is that they committed many atrocities and till today many find it hard to forgive them for those atrocities. Many of our people in the south-west were killed, locked up and driven into exile by that government as was the late General Shehu Musa Yar'adua and many others from other parts of Nigeria. I myself had to leave the country and go into exile in Ghana in 1996 because of them and I never thought that I would ever return to Nigeria again. Yet despite all that I cannot allow my bitterness and anger with the Abacha regime so becloud my reasoning and sense of justice that I would support or applaud a case of what would essentially be judicial murder.

Yes Abacha's government and even Mustapha himself, as a consequence of his unflinching loyalty to his boss, committed atrocities and violated the rights of many but does that mean that we should do the same to them? Do two wrongs make a right? Are we all to descend into the pit of slaying the innocent and punishing their families simply because we must have our pound of flesh and even where there is no tangible evidence to justify such a course of action? I challenge those that doubt me to look at the evidence and to study the judgement closely as I have done. It is wickedness and it is a travesty of justice. Worse still it sends the wrong signal to an already tense nation that is fraught with regional, north/south and Christian/Muslim tensions. This absurd judgement could not have come at a worse time and I have little doubt that the Boko Haramites amongst us (whether it be the overt or covert ones) will make quite a song and dance of it.

Thankfully Al Mustapha has the right to appeal but the implication of that is that this man's enemies have virtually destroyed his life already and left him with no hope because, unless he is granted bail pending that appeal, he will be struggling with it from the dingy dungeons of Kirikiri prison all the way to the Supreme Court for the next ten years. That is the Nigerian state and ''system'' for you. When you are loyal to your leader, when you speak out in his defence, when you defend him with your life and when you tell the world the truth they come at you with everything that they have got and seek to jail or kill you for it once that leader is no longer in power or is no longer alive. One thing is clear though- those that seek to hang Al Mustapha and silence him forever have forgotten the God factor. They have forgotten that there is a God of justice and mercy who still rules in the affairs of men and who forges the destiny of nations.

For my old adversary and new friend Major Hamza Al Mustapha I will not beg any mortal for mercy and neither will I plead for him. I will only pray to the Living God that if truly this man is innocent, as I earnestly and honestly believe that he is, then he should be eventually freed and completely vindicated. This is especially so because something tells me that our country will still need him. God's ways are not ours and only He sees and knows the hidden things that lie ahead. It is not Al Mustapha that we should weep for, it is Nigeria.

Finally let me restate my position clearly for all to see and for posterity to take note of. I believe that Hamza Al Mustapha is innocent of this crime. As far as I am aware there is absolutely no evidence against him and the only person that said that he ordered him to go and kill the late Kudirat Abiola (Sergeant Barnabas Jabilla) has long since recanted and said that he was induced and compelled to give that false evidence by the authorities. In any civilised country that would have been the end of it but not in Nigeria. In Nigeria it is a case of ''we must get him at all costs'' even if it means bending the law and influencing the courts. One has to ask whether, as a people, we have any fear of God? Is there any justice in Nigeria? Is there any fairness? Can we ever rely on the courts to do the right thing when the state determines to punish an innocent man for his perceived sins against the powers that be?

I am fed up and disgusted with the sort of thing that goes on in this country when it comes to such matters and I just cannot understand how Nigerians are so comfortable with such injustice and wickedness being meted out to their compatriots. Do they not know that tomorrow it could be them or a member of their family? On this matter I stand by Al Mustapha shoulder to shoulder just as I do with every other innocent person that has been unfairly charged to court for political reasons and who has suffered persecution at the hands of a relentless and vicious state that have no fear of God.

This country just has to change. God's wrath is stirred up by such wickedness and insensitivity. You lock up an innocent man for 13 years in the most horrific conditions for something that he did not do, you delay his trial, you wrongly convict him where there is clearly no evidence to justify it and now you want to hang him? God is not asleep Nigeria. Unless God wills it Hamza Al Mustapha will not hang and ultimately he will be vindicated. My prayers are for him and for his family at this difficult time. God bless Nigeria.