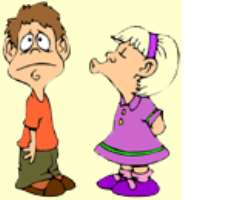 "Equal" is not always synonymous with "the same." Men and women are created equal. But, boys and girls are not born the same.

6. Boys couldn't care less if their hair is unruly. If their bangs got cut a quarter-inch too short, girls would rather lock themselves in their room for two weeks than be seen in public.

12. Most baby girls talk before boys do. Before boys talk, they learn how to make machine-gun noises.

13. Girls will cry if someone dies in a movie. Boys will cry if you turn off the VCR after they've watched "Teenage Mutant Ninja Turtles" movie three times in a row.