Battles Go On Around Damascus 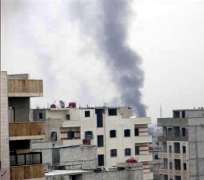 Street battles raged on the doorstep of the Syrian capital on Monday, as President Bashar al-Assad's troops sought to consolidate their grip on suburbs rebel fighters had taken only a few miles from the centre of Assad's power.

Activists and residents said Syrian troops now had control of Hamouriyeh, one of a cluster of districts where they have used armored vehicles and artillery to beat back rebels who came as close as eight km (five miles) to Damascus.

An activist said the Free Syrian Army - a force of military defectors with links to Syria's divided political opposition - mounted scattered attacks on government troops who advanced through the district of Saqba, held by rebels just days ago.

"Street fighting has been raging since dawn," he said, adding tanks were moving through a central avenue of the neighborhood. "The sound of gunfire is everywhere."

The rebels said at least 15 people had been killed as they pulled back in Saqba and Kfar Batna. Activists have claimed a death toll of several dozen in three days of fighting in the districts, which have seen repeated protests against Assad's rule and crackdowns by troops on the 10-month-old uprising.

The escalating bloodshed prompted the Arab League to suspend the work of its monitors on Saturday. Arab foreign ministers, who have urged Assad to step down and make way for a government of national unity, will discuss the crisis on February 5.

Syria's state news agency said "terrorists" blew up a gas pipeline, a frequent target during the uprising against Assad, and residents of the southern city of Deraa - where unrest first erupted - said army defectors and government troops were waging gun battles that left at least 20 dead, most of them government forces.

Syria restricts access to the country for journalists and the numbers could not be immediately verified.

ARAB PEACE PLAN
Arab League chief Nabil Elaraby left for New York on Sunday where he will brief representatives of the U.N. Security Council on Tuesday to seek support for the Arab peace plan.

He will be joined by Qatari Prime Minister Sheikh Hamad bin Jassim al-Thani, whose country heads the League's committee charged with overseeing the Syrian crisis.

Elaraby said he hoped to overcome resistance from Beijing and Moscow over endorsing the Arab proposals.

On Monday, Russian Deputy Foreign Minister Gennady Gatilov Moscow first wanted to hear directly from the observers whom the Arab League sent - a move likely to delay any vote:

"It would be logical, considering the complexity of this issue, for Security Council members to be able to study the recommendations and conclusions of the observer mission in detail," the Interfax news agency quoted Gatilov as saying.

"Only after that would it be possible to count on a substantive discussion of this issue in the Security Council."

A Syrian government official said the Arab League decision to suspend monitoring would "put pressure on (Security Council) deliberations with the aim of calling for foreign intervention and encouraging armed groups to increase violence."

Assad blames the violence on foreign-backed militants. Activist groups based abroad acknowledge troops and security forces are being killed, and the state news agency SANA reported funerals for more than 50 security force members at the weekend.

After mass demonstrations against his rule erupted last spring, Assad launched a military crackdown. Growing numbers of army deserters and gunmen have joined the protesters in a country of 23 million people regarded as a pivotal state at the heart of the Middle East.

The insurgency has crept closer to the capital. The suburbs, a string of mainly conservative Sunni Muslim towns known as al-Ghouta, are home to the bulk of Damascus's population.

The rebel force said on Monday supplies of medicine and blood were running low in field hospitals, some established in mosques, and that advancing government forces were carrying out mass arrests.

The Damascus suburbs have seen large demonstrations demanding the removal of Assad, a member of the minority Alawite sect, an offshoot of Shi'ite Islam that has dominated the mostly Sunni Muslim country for the last five decades.

In Rankous, 30 km (20 miles) north of Damascus by the Lebanese border, Assad's forces have killed at least 33 people in recent days in an attack to dislodge army defectors and insurgents, activists and residents said on Sunday.

Tehran at first wholeheartedly supported Assad's hardline stance against the popular protests. It has since qualified its backing, but it condemns what it calls foreign interference in the affairs of its main Arab ally.

"We think that Syria has to be given the choice of time so that by (that) time they can do the reforms."

Syria has said it will hold a referendum on a new constitution soon, before a multi-party parliamentary election that has been much postponed. Under the present constitution, Assad's Baath party is "the leader of the state and society."

France, which has been leading calls for stronger international action on Syria, said the Arab League decision highlighted the need to act.

The United Nations said in December more than 5,000 people had been killed in the protests and crackdown. Syria says more than 2,000 security force members have been killed by militants.

On Friday, the U.N. Security Council discussed a European-Arab draft resolution aimed at halting the bloodshed. Britain and France said they hoped to put it to a vote next week.

Russia joined China in vetoing a previous Western draft resolution in October, and has said it wants a Syrian-led political process, not "an Arab League-imposed outcome" or Libyan-style "regime change."