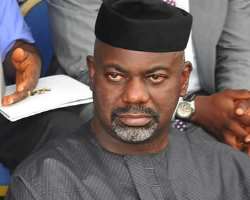 Zig Ziglar, a popular man of axiom, once said ‘It is not what happens to you; it is how you handle what happens to you that is going to make the difference in your life.’ Another saying by Anne of Austria goes this way: God is a sure paymaster. He may not pay at the end of every week, or month, or year, but remember He pays in the end.

This is a pointer to the fact that God is a sure rewarder of every good deed. He does not sleep. He does not slumber. He does not delay. And true to the words of Ziglar, a man is expected to express positive spirit at all times because God always has a say in what happens to him.

It is true that the Supreme court, the highest arbiter of law in the land has given judgement on the tenure of five Governors: Ibrahim Idris of Kogi, Murtala Nyako of Adamawa, Aliyu Wamako of Sokoto, Temipre Silva of Bayelsa and our own Liyel Imoke. It is also true that these Governors have been ordered by the Court to vacate Office immediately, but lessons must be learnt from all this, as well as its implication on the non-relented bid of Senator Imoke to re-contest the governorship election.

First, the ruling has put an end to the political entanglement that has been existing for a long time over when the tenure of the affected Governors actually started, after their initial oath-taking in May 29, 2007, and when it ought to have ended after another oath was administered on them on separate dates.

Then came the verdict that ended the puzzle: The court in Abuja held that the tenures of the governors started to count from the time they took their oath of office after emerging winners in their respective state governorship elections in 2007 and not from the period they took their second oaths of office after emerging winners of the re-run elections when the initial elections were nullified.

A Federal High Court had earlier held that their tenures of office started to run from their later oaths of office and oath of allegiance which they took upon their emergence as winners of their respective re run elections.

The apex court, which gave its judgement on Friday held that the trial court as well as the Court of Appeal erred in law when the considered the actions taken by the respective governors before their elections were nullified by the various Election Petition Tribunals as valid on one hand while discounting the time they spent doing those valid actions from their constitutionally prescribed tenure of office.

According to Section 180 (1) of Nigeria’s 1999 Constitution, subject to its provisions, a person shall hold the office of Governor of a State until -

(a) When his successor in office takes the oath of that office; or

(b) he dies whilst holding such office; or
(c) the date when his resignation from office takes effect; or

(d) he otherwise ceases to hold office in accordance with the provisions of this constitution.

In reaching their decision, in a ruling presided over by Justice Walter Onneghen, the Supreme Court relied on section 180 (2) of the Constitution wherein the tenure of office of Governors were prescribed and held that that section did not envisage any form of elongation of occupants of the office of the Governor of the state as well as that of the President.

The section reads: Subject to the provisions of subsection (1) of this section, the Governor shall vacate his office at the expiration of period of four years commencing from the date when -

(a) in the case of a person first elected as Governor under this Constitution, he took the Oath of Allegiance and oath of office; and

(b) the person last elected to that office took the Oath of Allegiance and oath of office or would, but for his death, have taken such oaths.

The court held that the provisions of that section of the Constitution will stand violated if the tenure of office of the Governors is calculated from their second taking of Oath of Office and the Oath of Allegiance and stated that their tenure started counting from their first Oath of office which they all took after they were declared winners of the April 2007 elections and that they are entitled to four year terms from that date.

While dismissing the preliminary objections of the Peoples Democratic Party (PDP), the apex court maintained that the matter is of grave constitutional importance whose subject matter is still alive and cannot be truncated on the grounds of mere technicalities.

And in countering the decisions of the Federal High Court and that of the Court of Appeal, which have earlier given credence to the second oaths administered on the affected Governor, viz a viz, the August 26, 2008 oath administered on Governor Imoke, the apex court asserted that the provision of the law did not envisage an indefinite occupation of office by a Governor and did not also envisage re run elections, left alone one to be won by the same person.

It went on to hold that since actions of these governors, like contracts awarded by them, Commissioners and Special Assistants appointed by them as well as Budgets and Bills signed into law by them remained valid and subsisting when their election were annulled, that it followed that upon emerging winners of their respective re run elections, and having to take another Oaths of Office and Allegiance which is a standard procedure before they can function as Governors, that their tenure begins to count from that first oaths they took in 2007 and not the second ones they took in 2008 after their victories in the re-run elections.

Therefore, having now been faced with these realities, there is need for these relevant provisions to be streamlined so as to accommodate future challenges that may arise from political situations such as this.

There is also a need for the judiciary to always be prompt with their pronouncements and verdict rather than give room for tension and shocks before judgements are reeled out on sensitive issues such as this.

Regrettably, delayed judgements, such as this one given in Friday, are capable of causing confusion and disaffection among political players in the affected States. For instance, in Kogi State, as soon as the judgement ordering the swearing in of Speakers of the affected Houses of Assembly, both the House and Speaker and the Governor-Elect were immediately sworn in, thereby throwing the State into the state of bewilderment.

Besides, many questions are also being asked about certain interpretations of the judgements, considering the urgency such elucidation demands at the moment. The affected States are eager to vote in their preferred candidates as Governors.

In the case of Cross River, the PDP has conducted its gubernatorial primaries, where Senator Imoke has emerged as the preferred flagbearer, under the watchful eyes of Independent National Electoral Commission (INEC) as required by law. The electoral body, through its Resident Electoral Commissioner in the State, Barr. Mike Igini, who was at the venue of the exercise, has described it as fair and transparent.

It was not the first time Senator Imoke will be getting the nod of the people to fly the flag of the party. Ahead of the gubernatorial election he was to stand for in 2011, he also got the flag, which was duly recognized by INEC.

Interestingly, the choice of Senator Imoke by the people is always anchored on the fact that he understands what it takes to serve people. No wonder the people are resolving again that this recent judgement will not change their preference for the Senator as they get set to cast their votes for him in the coming election.

The high rate of transformation the State is now witnessing, beginning from 2007 when the Senator took his first oath to serve and respect the Constitution of the Federal Republic of Nigeria without fear or favour, is also a factor. Imoke has never disappointed the people. He has always served everyone, irrespective of language, tribe, political opinion and belief with all sense of responsibility.

Another interesting point to note here is that as soon as the judgement was given, Senator Imoke pledged cooperation with it in a message to the people and urged all to cooperate with the Acting Speaker and INEC in ensuring a peaceful transition.

This act of swift compliance with the law, gave him away as humble and willing to continue abiding with the law. He did not delay in handing over to the Speaker of the State House of Assembly, who by his matured handling of legislative affairs in the State, and teamwork with the administration of Senator Imoke, is capable of directing affairs until the election is conducted.

The Speaker, not known for double-speak, has demonstrated his support and that of the House by their recent endorsement of Senator Imoke for another term in office. They have further indicated this support by the creation of mutual relationship with the Executive, a situation that has distinguished the House from other legislative houses in the country, where rancor and display of selfish interests have become the order of the day.

The people on their part have a principal role to play in the face of all of this. There is no need to lose faith with the ambition of Senator Imoke, or worry that the process of transformation will be halted at this critical moment. This is the time to come together and ensure the success of this administration and that of Senator Imoke in the coming election.