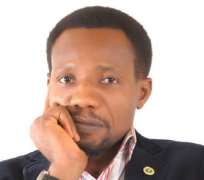 'Law 58' is an expository, yet shocking movie on gay practice and its consequences on the traditional African society.

The producer claimed that the movie, which stars the likes of Kanayo. 0.Kanayo, who played the lead character, Clarion Chukwurah, Halima Abubakar, Ghanaian actor, Kofi Adjorlolo, Mark Morris Chibueze amongst other Nollywood stars took him over four years to produce.

Dickson Iroegbu
Iroegbu also disclosed how actors like Mike Ezuruonye and Desmond Elliot refused to be part of the eyesore movie when he approached them to star in it.

In a chat with HVP, during the week, the light-complexioned director, who recently staged a comeback to the motion picture industry after few years of abandoning the trade, said the movie will be released on DVD as from next month. For him, the movie will relaunch him into the mainstream movie making.

Narrating how he came about the movie, Iroegbu said 'Law 58â€³ was the last movie he made before he  proceeded on sabbatical few years ago.

He,  however recalled how he was once called a gay, and accused of telling his own story because of his decision to produce the film, adding that  by the time the film hits the street, the world will acknowledge 'whether I am a gay or not.'

According to him, the movie  was produced between 2008 and 2009 .'When I saw the National Assembly debate on Gay Marriage, I thought it was prophetic because at the  time, I produced the movie, we hadn't engaged ourselves constructively on how to address the issue of gay.

'We  pretended then as if it didn't exist in our society.  Not knowing that it was gradually eating into the fabrics of the society.'

'So, one saw it at that time and set out to discuss it via the tube. I may sound very judgmental about it but I have no apologies whatsoever. Homosexual is an evil act that our culture and religion as Africans prohibits,  and so, speaking against it as a film maker is to re-echo what my society has been saying about the ugly practice.'

'At the time, I was shooting the movie, most of my colleagues frowned at the project because it was rumour  then  that some of them were involved in the act. I thought it was time to take a stand, given the fact that  I was once called a gay ,just to discredit my personality.'

'Today, I want the society to feel my purse differently, so that when the film is finally released into the market, they will be able to reconcile it with the Dickson Iroegbu they have known for several years. The world will also ascertain whether I'm a homosexual or not.'

When asked why it took him some time to release the movie, Iroegbu replied, '  it was as a result of some personal issues which I needed to address as well as  the the censors board's refusal to certify the movie on the ground that it dwells on an issue that is not allowed in Nigeria.

The board also demanded that I should go back  and re-edit the film, which I did. It was supposed to be a two-part film, but they insisted that I must reduce it to a one-part film. At the moment, I have fulfilled all the  board's requirements and I have  given a nod to release the film.'

On starring KOK as the lead character, the controversial movie director expressed sympathy for the actor. He said, ' I know how I tried to convince him to get involved in the movie. It took KOK some time before he agreed to star in the movie.

'Also, I approached actors like Mike Ezuruonye and Desmond Elliot, but   they screamed, and turned down the offer to star in the movie. For whatever reason they refused, I don't know.' The movie, according to Iroegbu, explores a true life story.