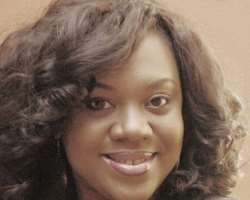 Acting appealed to Stella Damasus because it helps her pretend to be someone else. The youngest in a close knit family of five daughters born to retired bankers, the 31-year-old actress, singer and compere embraced stardom at a young age. Today, she is an award-winning A-list actress and was on the first-ever African panel for the Drama category of the International Academy of Television Arts and Sciences' Emmy Awards.

I had a problem with the kind of scripts coming my way. They made me a type-cast in the industry such that in any film I had to be either a victim and just cry. I got tired of it because it did not show my versatility as an actress so I looked out for people with good scripts that was different and that will make me work.

Another reason was because I set up a production company - SDA Productions - about two years ago, I had to give it a lot of my time and attention. As I grew older, I realised that I had to do something for myself and plan for the future because after a while, you will age and a new crop of actors will come up and you will be cast for 'mama roles' alone.

I found myself in Nollywood by accident. A friend of mine asked that I accompany her to a movie audition. When we got there, I saw a lot of young girls lined up to be auditioned. We stayed there until very late and as we were about to leave, the director, Mathias Obahiagbon asked if I had auditioned because he did not remember seeing me in there and I said I had come there because of my friend. He said, "Don't you want to act?" I said I was not interested and he asked me to come in and read a script. I was laughing all through because I did not take it seriously. At that time I was doing part time jobs at Klink Studios, Surulere, as a background vocalist and on jingles.

Three weeks later, they came to the studio and told me I had gotten the part and I was to be paid N10, 000. I was shocked because my salary then was about N700. The movie was titled 'Abused' and was shot in 1995. I got the sub lead role; the lead female role was played by Omotola Jalade Ekeinde. After that, I got more movie roles and I have not looked back ever since.

The thrill of the art

It's all about passion for me because I have never been a commercial artist doing it for money or fame. I love the fact that it gives me the power to know that I can be anything I want to be: a mad woman this minute, a drug peddler next time, maybe schizophrenic another time. That feeling alone drives me and makes my passion stronger. The plausibility thrills me; that I could do something and people think it was real. And when they see me in real life, they say how touching my role was or that they sympathised with me in a particular role.

Every point for me has been high because I see myself as privileged to be where I am. It's not about the amount of awards that I have had but the fact that I have managed to remain relevant in the industry till date.

My most challenging would be 'Queen of the Rain Forest,' the other, is not yet out. In 'Queen of the Rain Forest,' it was the first time I was doing a traditional movie and I was a queen. It taught me a lot of things. I had to learn the tradition of the Calabar people: how they fought, their marriage ceremonies and it really opened my eyes to how other cultures lived their lives. I had to learn to fight with a real sword and run under the sun. It made me see the difference between just an actor and someone who is trained. The second film 'Widow' was shot two months before my husband died contrary to people's belief that it was my story. When I read the script in 2006 after Agatha Amata had told me that we were supposed to use the film for Sithengi Film and Television Festival in South Africa, I was touched. I told her that we couldn't do the movie because people will hate the actors. Shooting the film made a strong impact on me because I felt what the widow felt.

I partnered with Jemilat Ofogbu Ogbo to form the young Widows Association of Nigeria. We cater for the needs and welfare of young widows around the country because we have been in that situation before it becomes easier to identify with their experiences. We assist with welfare, vocational training and finance where necessary.

It is intentional. There are different kinds of entertainers; some are in it for fame, others for money while some are in it for the love of acting. When I began acting, my family members were afraid if I would be able to handle all the fame and public attention because they know I am a very private person. I don't grant interviews anyhow so most times when they write stuff about me, it's all lies. I am first a human being before a star and I have a life. My children are young now so I have to protect them.

When they grow up and want to be in the limelight it is up to them. I want them to grow up normally, I want them to be able to go to Shoprite like every other kid without anyone pointing or saying "Those are Stella's kids." Most times when they write things about me, it is not that I am pained but I think about its effects on other members of my family. I try as much as possible to be as private as possible. If I don't have things to do, you will not see me at a bar or club, rather I will be at home spending time with family.