Onward, our own Ghetto Soldier 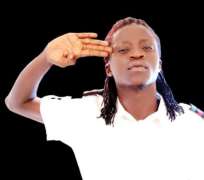 How is your album coming along?

The album is like 95 per cent complete; the remaining 5 per cent is basically arrangement and other little stuff that come with making an album.

Who else is going to be on it?

I've done lots of collaborations that some people are thinking that Pype may not be able to do well on his own. All those collaborations, however, are as a result of the love I have for music, making me readily available for the various invitations I got, which a lot of people are now getting wrong. The album is supposed to speak for me, promote me and reach out to the fans too.

What will it be called?

We want it to be a surprise; if I give out the title now, it will give you a mind set of what to expect on the album. But this I'll say, except different genres of music; look out for Pype on an Afro Beat rhythm and so on.

What exactly is the alliance between your label, Podium Records and Storm Records?

It is just a joint venture alliance for the Pype project.

Has aligning with a major label affected your creative process in any way?

No; I believe these things happen only to artists that have been caught in situations that they probably don't know what they are doing, in such cases, a label may change the artist's template. There is this saying that 'beware of a man that knows where he is going'. I've been doing this for sometime now, so it's kind of too late for anybody to dictate the message or direction of my music.

Does that mean you have 100 per cent control over your upcoming album?

Yeah; all I'm asked to do is record good music to the best of my ability; that I believe should go well with the fans and the people sponsoring the album too.

Did you write all the tracks on the album?

Yes, I write my songs. Along the line, if I get a little confused or overwhelmed by a particular topic, I just share the idea with the people in the house and source their opinion. But on the professional level, I handle my business and everybody around me understands that.

What inspires your writing?

Listening to good beats and the struggles of others from my neighbourhood [trying] to make music also motivates me. I see them work like an elephant and eat like ants, and I know I've got good potentials that I shouldn't let pass; because someone that knows how to read and doesn't read has no advantage over someone who can't read.

Your single, "Champion" is dedicated to Usain Bolt, why is that?

In my little journey around this world, I've been able to realise that everybody is a champion, it's just left for [them] to discover their potentials. Usain Bolt, as a point of reference, is no different from what people all over the world do with Obama to inspire themselves and other people. The message behind "Champion" is not for Usain Bolt or I alone, it's a message for everybody; I just have the privilege of being the one to record it.

Has there been any reaction from the sprinter?

From Bolt himself, I don't know but my fans from Jamaica have shown good reactions and they love it. They drop comments on my facebook and myspace page, as well as other web sites too.

Having met Sean Paul at the 250th Arthur Guinness Anniversary, are you guys looking at working together?

Yeah, we spoke about collaborations but unfortunately, he had to leave immediately after the show because he had a show in Miami the following night. He left before we could record but we are going to lock that down real soon.

On the inside, personally, I tagged that particular performance as one of my first real ones; it was a good platform, well arranged without hitches. It's like a different ball game entirely for me. It gave me big exposure because I had the opportunity to hangout with great names like Wyclef, Akon and some of our Nigerian artists. It was a lovely experience; it also established fans for me in Kenya. I was there a few weeks after the awards and my song was all over the Kenyan television stations. They even hosted a night for me there tagged 'Naija Night' at a venue Beanie Man was billed to perform the next day.

Why did you take the "Champion" video shoot to Obalende?

I grew up there and most of the people that have been with me right from the onset still live there. I literally walked (all) the various streets of Obalende while growing up. Initially, I hated growing up in that kind of neighbourhood but later, I began to appreciate the beauty behind it. I decided to take the video back to my roots to prove that even if you are from the ghetto, you can make something good out of yourself. It is a way of me giving back to the ghetto that raised me, so whenever they remember the making process of General Pype, they'll know that after God and my parents, they are my driving force.

Any personal plans to help develop the 'hood you love so much?

What I want to do is take my music global, then find a way of infusing it in the ghetto to affect the ghetto youth's life. It could come as a form of weekly gigs where they get to listen to positive messages. All I have is my music and I want to use it to preach positive (messages) to my neighbourhood; let them know that 'happy ever after' is obtainable at the end of every positive and legitimate struggle.
324nexst