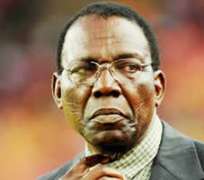 Onigbinde
FIFA and CAF instructor, Chief Adegboye Onigbinde, has warned against FIFA's hammer against the country, saying that NFF doesn't need to inform the House of Representatives before changing its name.

'It is better that both parties come together and discuss, to avoid FIFA's hammer. I want to advise those who are already in jubilation mood to hold their peace because this problem will degenerate to what will not favour Nigerian football, even though, I believe that Nigerian football needs re-organisation but that is not the way to do it, from the FIFA Statutes, NFF doesn't owe House of Representatives any obligation to inform it before changing its name.

Meanwhile, Onigbinde said that Nigeria was not missed at the on-going Africa Nations Cup in Gabon and Equatorial Guinea.

Before the present edition, many almost believed that Nigeria had a God-given right to participate at the biennial African showpiece, stressing that the competition without the country would lose its shine.

But having watched proceedings a few days after the start of the African football premier championship, Chief Onigbinde said he had come out with the verdict that the football fiesta had its glamour fully intact without Nigeria.

'For me, the Nations Cup is bubbling without anybody missing the so called big names in African football, who is conspicuously absent as result of her inability to qualify for the African World Cup. The insinuations of not having a high competitive game at the event are all false. In fact, with the way football is growing in Africa, time would come when all these countries who are not known in football would take over the African football fiesta. In football, names don't play football, neither do names achieve result, if you fail to plan well, you should not expect to achieve good result.

As far as I'm a concerned, the 16-team currently jostling for the prestige African trophy are the best we have in the continent for now. The only thing all the teams missing in this tournament should do is to fight hard to be in the next competition coming up next year in South Africa.