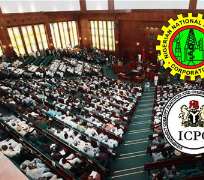 Recently, the Chairman House Committee on Anti-Corruption, National Ethics and values,Hon James Felekewas reported to have called onthe Independent Corrupt Practices and Other Related Offences Commission (ICPC) to wake up from its ‘’Slumber and show Nigerians (that) it was ready for anti- corruption Crusade’’ and charged it to go after ‘’Corrupt NNPC’.’


Weeks after the Hon. Member’s charge nothing has been done. One does not expect much from the commission as it is still in slumber. Someone has to wake it up from its comatose if the nation is to make any headway in the fight against corruption. The nation is just recovering from an avoidable anti-subsidy removal protests. Corruption has been identified as the issue that need to be addressed. There is no gain saying that corruption is at the root of the Nations under development. Reduce corruption and wastages as many have opined and 50% of the nation’s problems would be solved. It is therefore, in the interest of the nation that focus is made on the anti-graft agencies and how the war is being prosecuted.


The establishment of ICPC and EFCC was seen by many as a right step in the fight against corruption. However, public confidence in these agencies eroded as the agencies are perceived as the lapdog of the government, and that the government just established them to satisfy and convince some western powers about its commitment to fighting corruption.

There are reasons to doubt the sincerity and commitment of both the government and the NASS in prosecuting the anti-corruption war.It is time to asses and review performance of the anti-graft agencies and ensures they perform optimally in line with the Acts establishing them. These are the challenges before the Hon. Member and his committee as well the stakeholders in the search for good governance for the nation.

More need to be done to convince the public about the commitment to the fight against corruption. The Anti-graft agencies need to be strengthened and closely monitored. This is because some of these agencies had succumbed to the very evils they had been expected to cure. Institutions and laws are only as good as the people that man and implement them. A recent report about the Ag Chairman of EFCC conducting internal cleansing within the Agency is a pointer to the rot in these agencies. A similar appeal had been made early last year on the need for the internal cleansing of the ICPC. Corruption was observed to have become the order of the day within the commission. The Anti-corruption committees of the then National Assembly [NASS], the Presidency and the Management were alerted of the shenanigans of the top management. Nothing was done. This emboldened the top Management to embark on more acts of corruption with impunity. It is trite that those who come to equity must do so with clean hands. But this maxim does not seem to have any meaning here.

The NASS and the Presidency will have to share in the apparent non-performanceand ineffectiveness of the commission. The NASS has oversight powers and for reasons best known to the leadership of the then committees refused to wield their inherent powers and rein in the avaricious demagogues in the commission.The government deliberately undermined the ICPC and programmed it to fail. For example, there is the perennial underfunding of the commission and subtle interference in its operations. Since 2004 the commission had been without full complement of Members as enshrined in its establishment Act. The former chairman who is devoid of moral and financial integrity run the commission like Sole Administrator. The seed of corruption was sown and fertilised during his inglorious tenure. His cronies ensure the sustenance of such unviable legacies. In less than a year the commission has had a record of four Acting Chairmen!


The internal weaknesses,wastages and corruption in the ICPC were highlighted and brought to the notice of the last National Assembly and the Presidency but nothing has been done to check those lapses.The assumption by many is that both the presidency and legislature prefer weak anti-corruption agencies that can be easily compromised, and the ICPC appears to have fit into this description. The Hon. is therefore reminded of the oversight powers of his committee to scrutinise the commission. The simple truth is that the ICPC cannot be effective in the fight against corruption because itself is not immune to corruption virus.

The commission has just had some new Members appointed to it. I believe they are people of strong character, conviction and integrity.It is hoped that they will borrow a leaf from the EFCC Ag chairman andbegin internal cleansing of the commission and probe the alleged acts of corruptions within for it to be efficient.

The President recently suspended the appointment of the designate chairman of the commission on account of his being ‘’Politically Exposed Person.’’ And yet condones the antics of some ‘’Corruptly Exposed Persons.’’

The Hon. Member’s charge for the investigation of NNPC is a real challenge and welcomed. But my fear is let not this investigation end the way ‘’investigations’’ were carried out at the Federal Mortgage Bank of Nigeria [FMBN].The investigators suddenly become landlords in an Estate at Area One, Abuja. A complaint from the staff of FMBN on the alleged misconduct of the staff of the commission was swept under the carpet. There are a number of proven cases of corruption involving some highly placed officers closed to the former chairman whose cases remain undecided.

It should be noted that a high profile team of investigators was recently constituted to investigate the NDDC. Public funds were expended on this team. It will be interesting to know the outcome of the investigation activities carried out there, and if not why not?

A forensic auditing of the Accounts of the commission and investigation activities will help unravel the mystery behind appropriation of funds in the name of financial consultancy and of the phantom cases initiated and settled in the comfort of offices of some highly placed officers. Some of the ‘cases’ have no records in the commission’s official Register of Petitions.

It should also be noted that some high profile case files are nowhere to be found and some investigations abandoned half without apparent reasons.


Recently, the president forwarded a complaint to the senate of a Chief Executive of a government agency who held on to official files and vehicles. It will be interesting for the senate to forward same complaint to ICPC for investigations. The former chairman of the commission almost two (2) years after the expiration of his tenure is yet to handover. He is still in the custody of his official cars and carted away all government properties in his official residence.


Just last week,media reports quoted the ICPC’s Head of Public Enlightenment,Mr Mike Sowe, saying the Bureau of Public Procurement (BPP) Petitioned Nnamdi Azikiwe University to the commission for breach of section 58 of the public procurement Act 2007. The university is to be prosecuted by the ICPC under section 19 of its Act. That is interesting. Only that the public may wish to know who is investigated and prosecuted for breach of the same procurement Act in the construction of the ICPC Academy at Keffi,NasarawaState.One may recall that the BPPqueried the commission on the same subject matter it is requesting on the university. What is sauce for the goose should be saucefor the gander.


The President recently identifiednepotism as the bane of the public service. The public may wish to know that nepotism and cronyism are entrenched in the commission. It is instructive to note that one of the key mandates of the commission is to examine systems and procedures that aid corruption with a view to plugging them. The last secretary brought in the present secretary as a Head of Department. Upon his retirement ensured contrary to all public service regulations conspired with the then chairman to make him the secretary. To reciprocate the ‘favours’, the retired secretary to the commission has for over 2 years after leaving service continued to enjoy among other perks, the salary of a ‘’ghost driver’’.

To continue with the culture, the present secretary also brought in a personal friend and appointed him director on salary GL17. Some internal re-organisations including the swapping of a substantive head of department and the creation of an unnecessary department just to accommodate this director had to be carried out. This appointment contravened the regulation on appointments into the public service. No proper selection process was observed as the post was not advertised. Most important the appointee does not possess the required professionalism and skills relevant to the department assigned. Similarly, an officer with criminal records from the same geographical area with the secretary had a unit created to him. What away to reward corruption! Methinks the ICPC is a public institution not a private organisation, and a transparent organisation for that matter!

Also disquiet and frustrations are brewing over these illegal appointments on promotions when there are other capable officers within the commission. While the issue of down grading of salary grade level remains pending some others had theirs surreptitiously restored. The action of the Management in this regard is unjustifiable and unconscionable for an integrity institution. Some acting appointments were recently made to appease and shut the management about the glaring unlawful acts.

The commission is set to conduct a recruitment exercise that is devoid of allelements of transparency. This recruitment exercise is an integrity test for the new Acting Chairman and the board Members. They may wish to know that the commission late 2010 conducted aptitude test for appointment into its service and towards the end of last year candidates were called for interview. However, majority of those called were not those who attended the aptitude test! Consultants were hired and public funds expended for the conduct of the aptitude test.Concerns were also expressed in the conductof the previous aptitude test over breach of the regulations of the Federal Character Commission which the commission chose to ignore with impunity. The ICPC is supposed to be integrity personified. Will the Members allow the special candidates said to be from the presidency and NASS to the detriment of other hapless Nigerians who defied all odds to attend the aptitude test?

The commission had earlier on carried out some appointments that were backdated to circumvent due process, civil service regulations and the federal character principle. These appointees are sons, daughters and relations of highly placed officers of the commission and they came in as ‘’Field Officers’’ before their conversions to full time appointments.


The local Anti-Corruption and Transparency Unit (ACTU) of the commission was so worried with the corrupt practices within the commission and sought audience with the secretary and the then Ag chairman. The ACTU Executives were bullied (compromised!)to drop their complaints! By the way, ACTUs are arms of the commission in all the Ministries, Departments and Agencies(MDAs) with the specific mandates to monitor, check and report Acts of corruption in the MDAs.


With all these (and several othersthat can be unearthed after a probe of the affairs of the commission), how can the commission perform effectively and efficiently! These are the challenges before the anti-corruption committees of the national assembly and the recently appointed members of the commission. The ICPC needs salvation. It needs to be strengthened to be effective.It needs more than tweakening.