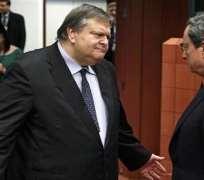 Euro zone finance ministers Monday rejected as insufficient an offer made by private bondholders to help restructure Greece's debts, sending negotiators back to the drawing board and raising the threat of Greek default.

At a meeting in Brussels, ministers said they could not accept bondholders' demands for a coupon of four percent on new, longer-dated bonds that are expected be issued in exchange for their existing Greek holdings.

Banks and other private institutions represented by the Institute of International Finance (IIF) say a 4.0 percent coupon is the least they can accept if they are going to write down the nominal value of the debt they hold by 50 percent.

Greece says it is not prepared to pay a coupon of more than 3.5 percent, and euro zone finance ministers effectively backed the Greek government's position at Monday's meeting, a position that the International Monetary Fund also supports.

Jean-Claude Juncker, the chairman of the Eurogroup countries, said Greece needed to pursue a deal with private bondholders where the interest rate on the replacement bonds was "clearly" below 4.0 percent, stating:

"Ministers asked their Greek colleagues to pursue negotiations to bring the interest rates on the new bonds to below 4 percent for the total period, which implies the interest comes down to well below 3.5 percent before 2020."

The aim of the restructuring is to reduce Greece's debts by around 100 billion euros ($129 billion), cutting them from 160 percent of GDP to 120 percent by 2020, a level EU and IMF officials think will be more manageable for the growth-less Greek economy.

But with Greece off-track in its efforts to get its budget deficit in shape, the 2020 goal looks a long shot at best.

The disagreement increases the risk that it will prove impossible to strike a voluntary restructuring deal between Greece's creditors and the Greek government - an outcome that would have severe repercussions for financial markets.

Negotiations over what's called 'private sector involvement' (PSI) have been going on for nearly seven months without a concrete breakthrough. Failure to reach a deal by March, when Athens must repay 14.5 billion euros of maturing debt, could result in a disorderly default.

Despite the disagreement, Olli Rehn, the European commissioner in charge of economic and monetary affairs, said he expected a deal on PSI to be struck "within days."

PERMANENT BAILOUT FUND
As well as assessing Greece's debt restructuring, euro zone ministers discussed efforts to enforce stricter budget rules for EU states via a "fiscal compact," and steps to finalize the structure of a permanent euro zone bailout fund, the European Stability Mechanism (ESM), which is due to operate from July.

The ESM will have an effective lending capacity of 500 billion euros and replace the European Financial Stability Facility, a temporary fund that has so far been used to bail out Ireland and Portugal and which will be used to provide part of a second, 130 billion euro package for Greece.

Germany has insisted that once the ESM is up and running, the combined potential outlay of the EFSF and ESM should not exceed 500 billion euros.

Italian Prime Minister Mario Monti and IMF chief Christine Lagarde have said the ceiling should be raised, possibly up to 1 trillion euros, so it has more than enough capacity to handle any problems in major economies such as Spain or Italy.

The Financial Times reported Monday that German Chancellor Angela Merkel was ready to see the ceiling of the combined firewall raised to 750 billion euros in exchange for agreement on tighter euro zone budget rules, but the report was immediately denied by her chief spokesman.

"It is not true. There is no such decision," Steffen Seibert told Reuters.

Monti told reporters after Monday's meeting that no conclusions had been reached on the ESM, which all 17 euro zone countries must back in a new treaty. Officials said the details would have to be finalized by an EU summit on January 30.

It was a similar situation for the "fiscal compact," which also involves a new treaty and which EU leaders are expected to agree at the summit next week.

"We have had an extremely constructive meeting on the fiscal compact and this text is a good basis for the discussions for the heads of government at the end of the month," said Juncker, sidestepping concerns about the text raised by the European Central Bank.

DEBT SUSTAINABILITY
Despite the continued deep differences, Greece and its private creditors do appear to be slowly converging on a deal in which private bondholders would take a real loss of 65 to 70 percent on their Greek bonds - giving a nominal reduction of 50 percent - officials close to the negotiations say.

Sources close to the talks told Reuters Monday that the impasse centered on questions of whether the deal would return Greece's debt mountain, currently over 350 billion euros, to levels that European governments believe are sustainable.

"There will likely be an updated debt sustainability analysis that will be discussed at the Eurogroup," a banking source in Athens said, requesting anonymity. "Talks will continue this week. The aim is to have an agreement by late next Monday."

Speaking in Berlin, Lagarde called on European leaders to complement the "fiscal compact" they agreed last month with some form of financial risk-sharing, mentioning euro zone bonds or bills, or a debt redemption fund as possible options.

Merkel told a news conference it was not the time to debate an increase in the euro zone's bailout funds.

"I don't think it is right to do one new thing then do another, let's get the ESM working," Merkel said, reiterating that Germany was prepared to accelerate the flow of capital into the ESM ahead of its planned introduction in mid-2012.

Euro zone leaders agreed in October that the second bailout would total 130 billion euros, if private bondholders forgave half of what Greece owes them in nominal terms.

But Greek economic prospects have deteriorated since then, which means either euro zone governments or investors will have to contribute more than thought.