Susan Peters: A Lady in waiting 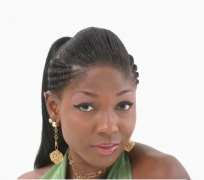 As premiere after premiere continue to be unleashed from the folds of Nollywood, a certain lady clearly stands out; oozing poise and grace.

That lady is Susan Peters. Who is Susan Peters and which films has she done? When did she enter the industry? Those were the words
swirling in my head when I caught up with the pretty actress recently.

Here's what went down.

BA: Your name doesn't tell me where you're from… are you Nigerian?

SP: I'm a proper Nigerian girl. I'm from Benue ..of Idoma tribe to be precise.

BA: I've been seeing you at several industry gigs… have you been in the industry (Nollywood) long?

BA: Really? Which ones?

SP: 'Wasted Effort' directed by Andy Amenechi, Sound of Poverty,…recently 'Nollywood Hustler' and some soon-to-released films such as 'Bursting Out' starring Genevive Nnaji and Majid Michel and 'Mortal Attraction' starring Ramsey Nouah and Monalisa Chinda. I have also acted in a couple of soaps; Tajudeen Adepetun's 'Dominoes' and Blessing Egbe's 'Disclosure' soon to be aired on DSTV.

SP: In a very interesting way. I never really planned to go into acting. I had a shop.. a boutique in Kaduna and some people approached me, saying they wanted to use the shop to shoot one of their scenes.. I agreed and after they finished the shoot, the director asked me if I would like to act in the production. At first I said no then later succumbed. I quite enjoyed myself and decided to do it full time. I attended film school and here I am.

BA: I noticed your performance in 'Nollywood Hustler' at the premiere and couldn't help noticing how fiery you were…

SP: (laughter) 'Nollywood Hustler' is a comedy. I played the part of a bush wanna-be actress that wanted to enter the industry by all
costs. I was Uche Jombo's (character's) friend and we had fun laughing at ourselves. Check out my make-up and costume! (general
laughter). I have some other projects about to hit the screens like 'Bursting Out' a romantic comedy that featured Genevieve Nnaji and
Majid Michel. I acted the part of Majid's jilted lover. I showed the poor boy pepper in the film! (laughter)

BA: Are you like that (troublesome) in real life?

SP: Of course not… who will admit anyway! (laughter)

BA: Well, we look forward to these films when they come out,thanks so much for your time.
.
SP: You're very welcome…