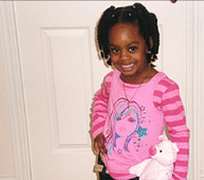 A six-year-old girl from Wolverhampton has been awarded a grade C in GCSE maths.

Esther Okade was entered for the exam by Ounsdale High School in Wombourne, Wolverhampton.

Her father Paul said she was due to sit A-Level maths next year and has been invited to read maths at the University of Cambridge if she passes.

"I am probably the happiest dad in the world," he added. He said Esther took after her mother who was a maths tutor.

Quadratic equations
"About three years ago my wife noticed her knack for numbers. She picked up her times tables very quickly and she was able to handle numbers that you wouldn't think a child of that age would be able to.

"My wife taught her the structure of mathematics, then moved on to algebra and quadratic equations."

Esther practised on past papers and took the exam in a private room in the secondary school, monitored by three examiners and her mother.

"Because she is so young I don't think she has realised the seriousness of what she has achieved.

"It's probably going to take a few years for her to realise what path she is on," Mr Okade said.