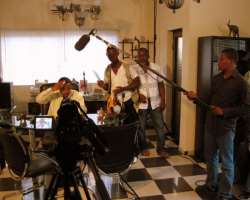 on set
Listen to article

Stanley Ebonine is a Nollywood movie producer. He has produced notable movies including; Girls Cult, Boy's Cult, War Game, Total crisis, Wild and Dirty, Celebrity, Faculty, Fear Not, Sincerity, Reggae Boy. In this interview with EBERE NDUKWU, Stanley talks about what it takes to produce a movie, his love life among other things. Excerpts:

What motivated me was my love for entertainment. Since my childhood, I have always tried to involve myself in things that can bring happiness to me and people around me.

There are epic, adventurous, romantic, emotional and many other kinds of movies, which of these do you prefer?

I fancy glamour movies that involve ladies. I have done a lot of such movies. I use such movies to talk about the affairs of the society.

What are the prominent movies you have produced so far?

I have to my credit, Girls Cult, Boy's Cult, War Game, Total crisis, Wild and dirty, Celebrity, Faculty, Fear Not, Sincerity, Reggae Boy among others.

How do you get your stories?

Do you accept movies that are not your ideas?

I do, but I must go through it thoroughly, if I'm satisfied with the story, I produce it.

How much does it cost to produce a movie?

To produce a movie in our country costs millions of naira.
For instance, when you want to do a high budget movie, it is between N5 and N15 million.

How do you cope with the level of piracy in the industry?

Piracy is like a canker-worm in the business of movie production. You cannot stop movie production because your movie will be pirated, except you are unserious. Though, as the issue of piracy seems unending, God has still made it possible for good movie producers to have something at the end of production.

I believe that every good director must know what he wants. If you are a good director and a producer tells you who he wants to feature in his movie, it's left for the director to determine if the person can play the role or not.
But we must know that the producer is the person who pays the piper. So, when a producer says that he wants to feature particular artistes, he does that from the business perspective, because he believes that the artistes can enable him make profit at the end of the day. Irrespective of this, a good director still has the opportunity to critically analyse the situation and know which role an artiste can play better and suggests that to the producer. The director can say to the producer, “since artiste B must be featured in this movie, I don't think he can interpret this role well, let's give him another role.” No good director will excuse a poor movie on the basis that the producer determined the artistes featured in the movie.

It is believed that some actresses in order to get role seduce producers or directors, have you experienced such before?

Once in a man's life, he can be seduced by a woman. I have encountered such on several occasions. But, I'll like you to note that it is not peculiar to the movie or entertainment industry. It is in every sector of human endeaour. Go to the oil, banking and education sectors, it is the same. There are people who can do anything to get what they want.
For instance, when I did the audition of one of my movies, Celebrity in Abuja, a lady sent me a text message to meet her in a hotel at Wuse zone 5.

Did you honour the invitation?

I did not. I only saw it as a temptation. I have a focus and wouldn't want to be distracted. Why I always produce good movies is because women are not my priority. It is not that I'm a saint, but the last thing I will do is to compromise my job with a woman or gamble with my profession because of a woman.

When are you planning to get married?

It is a very serious question. Anyway, God knows the best, at the right time I will go in for that.

Are you in relationship?

At the moment I'm not in any relationship.

She must be God fearing with good home training.

How did it happen?

It's a long story my brother.

You can cut it short

This involved was a girl I knew during my secondary school days. We continued in that relationship to our higher institution until we graduated, but suddenly she backed out. When I called her, she told me that she was traveling to London with her fiancé.

How did you feel then?

Hei-men! The whole world turned black for me. After all that we shared together I was disappointed at what it turned out.

Due to that experience, I don't think I'll ever go into any long relationship again. Anytime I find the right girl, it's straight to alter.

What appeals to you mostly in a woman?

For me every beautiful woman appeals to me and I believe that all women are the same. Whether she has large boobs or big arse, they are the same.

Igbo language is going into extinction and some people believe that the situation can be improved by producing movies in Igbo language like Yoruba and Hausa counterparts, what's your reaction?

Motion picture in Nigeria started with Igbo movies; including Living in Bondage, Evil Passion and Taboo. However due to lack of focus, we missed the track in pursuit of materialism. We prefer to produce movies in English language, so that we can have a larger market.
Again, Igbo artistes are also not helping matters. For instance, a Yoruba producer could ask Omotola Jalade to play a role in a Yoruba t movie and she will act the movie no matter the amount offered to her. But an Igbo producer cannot offer Genevieve Nnaji or any known Igbo artistes less than the amount offered to produce an English movie to perform in an Igbo movie. What he or she will charge to play a role in an Igbo movie is enough to discourage you. When you see a Yoruba actresses feature in English movies, they charge high, but once is a Yoruba movie, they know it's there culture, so they charge less.

Instead of using N5million to produce a movie that will sell only in Igbo setting, a producer will rather spend the same amount to produce an English movie which sells beyond the shores of Nigeria.

It's unlike Yoruba people; the money used in producing one English movie, a Yoruba producer will use it to produce five quality Yoruba movies.