OCCUPY NIGERIA ACCORDING TO 'AMEBOS' 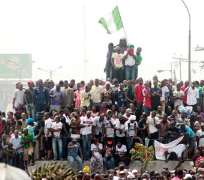 The defects and faults in the mind are like wounds in the body. After all imaginable care has been taken to heal them up, still there will be a scar left behind. Francois de La Rochefoucauld

A gossip is one given to tattling, idle talk or rumour especially about the personal or private affairs of others. A gossip is a busybody, chatterbox, and a parrot, in local parlance, here in Nigeria, we call such persons an 'amebo'.

What started out as a protest is today an 'Occupy Nigeria' movement. The issues have almost snow-balled while a docile leadership looks on, playing Tom and Jerry as the nation boils.

Every Nigerian has become an expert in oil production, sales, consumption and export. We see all sorts of figures and mathematics, everyone is an amebo, and even a carpenter is knowledgeable about refinery maintenance, turnaround and capacity, after all, there is a Google ‘how to do’ on almost everything on earth.

For Nigerians it’s all about Fuel Subsidy Removal and nothing else, you won’t blame us; it’s the reigning and hopefully not the last hottest issue around, still there will be a scar left behind.

The government official amebo NTA has carried on like all is well, not that one blames them, the television house is part of what is wrong with Nigeria, the taxpayers pay, and the government dictates the tune. We are grateful for the people's amebo like this medium,that has lived up to their responsibilities.

What have we not heard from amebos, like Dr. Levi resigned, or that Reuben found his conscience and left Mr. Jonathan, and while Mr. Attorney General was threatening workers and protesters, some amebo found millions in dollars in his account, he said the accounts were his, but “money wasn’t his'’.

Amebo is Sanusi, caught in between economics and realism, or could anyone miss Labaran Maku, the onetime deceived student activist earning his pay as the chief amebo in charge of misinformation.

There is the ex-world Bank amebo that told us that FSR wasn’t her idea but that of the 36 amebo governors, other amebos said it was the beautiful amebo in petroleum. However the fact remains that some amebos succeeded in 'confusing' my apologies, I mean convincing the amebo-in-chief.

While we occupied, amebo sources revealed that actually unknown to many we are where we are with this particular government because Mr. Jonathan had shoes but just won’t wear it. He had better options but won’t use it, cause he just cannot see it.

We have painfully and sadly been made to witness unavoidably deaths due to the only Police with force in the world, they tackle protesters with live bullets, shot into the air, and citizens are killed by accident and the government calls such extra-judicial killings of protesters just “passing away” according to Ngozi Iweala

Whether we finally get N65 or a bargain, the fact is that Nigerians know more today. The risk is higher; the nation is on the edge. Many amebos, lots of half-truths, misinformation, and propaganda, outright lies, thankfully the bitter truth too.

Truth such as this government has goofed and sadly they have been doing that since inception, and most likely will do till the end of its time.

One of the many things most people know now, including those that voted Jonathan and not PDP is that it makes no difference, Mr. President has made several speeches, watered talks, none addressing the issues, none of them firm, or convincing enough.

How government of over 40 ministers, countless advisers cannot address or arrive at a solution to the FSR problem tells it all. How 1600 diesel buses and a 25% reduction in basic salary of the executive will solve a problem of over 150 million people tells you how unimaginative the government is.

Only amebos can really tell us how one compares a SIM card to fuel, after deregulation Kerosene is on the increase, and almost unavailable all the time and diesel still has not seen any significant improvement.

Some amebo say the protests have been hijacked, but we must also recall according to Mr. Jonathan with Boko Haram in the Executive, Judiciary and Legislature, his government has equally been hijacked.

Amebos inquire why this government has pumped in so much energy into the poison called FSR, but cannot do same for security and other sectors of the Nigerian state.

While we are occupying, ethno-religious themed killings continue in Adamawa, Gombe, Yobe, Borno, and Edo, and in some cases government has been fingered.

Amebos watched with pain as India celebrated one year without a polio case and Obama sought to merge government agencies for more effectiveness and cut costs.

The Defence Minister said we should give them six months to turn Nigeria into London, the Petroleum Minister said the Port Harcourt refinery will be working by October/November, why not let all this happen first and let Nigerians pay N500 per litre for PMS.

Amebo sources say Mr. Jonathan is the most abused President in the shortest period of time, in recent times, Abacha was cruel, but now we know, he stole, but he was prudent too. Obasanjo was arrogant, vengeful but left us plenty money in the reserve and plenty problems too, late Yar'adua was slow, unfortunately today Jonathan is not moving and do you blame a nation suffering from expectation fatigue.

While all I have said is subject to all sorts of debate, and argument. I end with the truth; first Nigeria is not a private or personal property of a few. The truth is that this government is at loss on many fronts.

Nigerians are hatefully divided along different lines, despite all the tattling, rattling, gossiping and parroting. We cannot continue like this, Mr. Jonathan, it’s not about talk, it’s about action, act and prove us wrong, we doubt he can, we know he cannot, time will tell.