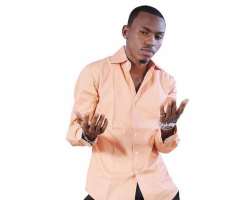 His song is one that everyone dances to at parties, clubs and even at home but few can pin a face to the man who brought smash hit "Pass Me Your Love" into our lives. In this interview he speaks on his career and the clash with producer Terry G. He is AY.Com. This is his story.

He is a boy, a fine boy. My name is Ayoola Johnson, I am from Ondo State, ilaje to be precise. I am fifth in a family of six [also the] second boy. I schooled in Lagos and now find myself doing music.

When you say 'you find yourself doing music' does this mean you never intended to go into music?

I would say no because my first time in a studio was in 1996. I was in a group called Little Superstars; we used to sing at street jams. We did it for fun and felt like King Kong then. I wasn't really taking it seriously [until] a friend of mine told me that if I took music as a profession, it would really suit me and that was how I decided to go into music. I started professionally in 2004, when I did my first single, which was produced by Nomoreloss, 'Gba si be'.

What message are you trying to pass with your songs?

My album has different messages; it's not talking about a particular thing, like track one of my album talks about Naija boys. The song "Pass Me Your Love" talks about chicks and all that. Music is an act; some are based on what's happening around while some are based on imagination, so all these things are put together into music. The image I'm trying to portray is not all about gingering your swagger, its about what people will appreciate and still sing even in ten years to come, just like my role model in the music industry, 2face.

I was a nominated as Best Afro and B Video. I was vexed because "Pass Me Your Love" is not an Afro and B to start with and my video is nothing compared to that of Banky W and Darey who were also nominees, so I knew I wasn't going to win and I even told the press who interviewed me before the award started the same thing. But I didn't feel bad because I know I'm just starting, so there are many awards I'm going to win

Yes and I'm not going to speak further about it.

How has your audience influenced your growth and development as an artist?

I have the street credibility and production creativity. I mean, I was surprised when I was invited to African Shrine to perform and I get calls everyday by fans who comment on my song. When I go to shows, the response I get from the crowd alone shows that I'm doing a great job and I am trying my best to improve myself.

Besides music, what else do you do?

Nothing for now, but I'm working on owning a record label.

I hang out with friends, go clubbing and I also enjoy swimming.

Where do you see the Nigerian music industry five years from now?

I see Nigerian artists owning their record companies and I see all the 'wack' MCs stepping aside for the talented ones to come in. If we can just stop imitating the foreign artists and learn to appreciate what we have, then I believe we can be better; then we will find out that what we have been looking for in Sokoto is actually in our sokoto.

How did you meet Terry G?

I met him through 2Shotz who I featured on my album. He referred me to Terry G [as] a good producer and I met him and admired his creativity and talent, so I believed we could do something together; he loved my swagger and I loved his. Before "Pass Me Your Love", we were really close. I never even planned to feature him on the song, but during the song, we decided that he should take verse two of the song.

What caused the 'beef'?

The rumour about the 'beef' or the fight is due to his stubbornness. Yes, he is very stubborn and I believe he doesn't know the difference between collabo and featuring. Collabo is when you both bring in the money, lyrics and so on to do a song together, but featuring is when only one person does both the financial and the song aspect of it and just calls in an artist to help you sing some part of the song. Even if he wants to sing the song, he should have sung his own verse and not everything. He was already singing the song for like three months before people started calling me and asking me who the owner of the song was and I had to do something. My reason for coming out publicly to say Terry G has claimed my song is because he didn't take permission from me before going ahead to sing the song and I think my point has been made. In the music industry, nobody really knows AY.Com but people know Terry G, so this song was a way of letting me be known, but he decided to sing the song. An accident happened in UNILAG where he was performing my song on stage and he knew I was also going to perform that song. I was backstage and suddenly other artists started asking me why Terry G was singing my song and that was when I reacted, I went on stage and confronted him and I used 30 minutes to explain to the crowd who the real owner of the song is. I'm not fighting Terry G, he is already known in the industry and I'm yet to be known, so if he goes around singing my song, how would I able to make it? I was only trying to make a point, which I have successfully made. Thank God for "Free Madness"; he just took advantage of the closeness we shared. Music is business and you don't bring sentiment into business.

What would you say about Terry G going on air to say he only featured on the song?

I'm glad he did that, but he went late. If he had taken permission from me before singing the song or singing his own verse as I said earlier, all this wouldn't have happened in the first place.