The magic of Nigerians’ creativities 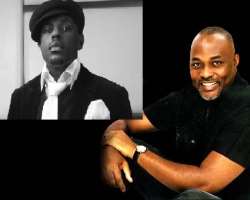 Nollywood starsAt its debut six years ago, it was an innovation that many did not believe could survive, but now, it has not only proved that it is a station where magic really occurs, it has also carved a niche as a platform for the propagation of the Nigerian movie industry. Yejide Gbenga-Ogundare reports.

It is now an art for growing stand-up acts in Nigeria to take pot shots at Nollywood, its characters, and in particular, the way the movies are produced, anytime they are on stage.

One particular anecdote is that of Jim Iyke's telephone conversation with Mofe Damijo, who was on his way to London when Jim's call got through to him. On learning that Damijo will be staying three days in the United Kingdom, Iyke asked if he was with his Camcorder. Answering in the affirmative, Iyke advised Damijo to shoot about '40 scenes' and 'other actions' before returning to Nigeria.

Iyke believed this would enable the two produce tens of movies and of course, earn good money from selling them! Although it sounds derogatory, the story makes the audience reel off in deep laughter because the joke bears some semblance to what plays out in the real world of Nollywood movie production.

More salutary stories have been told about Nollywood, and these stories not only raise the profile of the industry, but also that of the country. Nollywood is an industry that Nigerians ought to be proud of. Nollywood is ahead of Hollywood in the number of films produced every year, making it the biggest film market in the world behind Bollywood of India, say Hala Gorani and Jeff Koinage of the CNN in a report on Nigeria's film industry aired last year.

It is estimated that the industry produces about 4,000 movies worth US$250million every year, while popular talk show host, Oprah Winfrey says Nollywood is worth over US$2.5billion. Put in proper perspective, the annual worth of the films produced in a year is more than the annual budget of some states, while the total worth of the industry is about 10 per cent of the 2009 Budget of the Federation.

These are fantastic figures given that Nollywood's share of Nigeria's GDP is still largely unknown, the number of people employed is at best a guess, while the industry's overall contribution to economic development is sketchy. What is known, however, is that for an industry which is said to have started in the early 1990s with the release of Living in Bondage that is popular all over Africa and whose fame is spreading even beyond the African continent, it has achieved recognition beyond what many people would have imagined it could achieve.

Many factors account for the growing fame of Nollywood. Some of these include the family-oriented nature of the films, English as the medium of communication, the sometimes exaggerated lifestyles of the actors and actresses and more importantly, the continent-wide transmission on AfricaMagic of these films to an audience that is becoming increasingly hooked to Nigerian films. In its sixth year, AfricaMagic was launched to cater to films from the African continent but it is dominated by Nigerian movies.

The success of AfricaMagic led M-NET to establish AfricaMagic Plus for films from the East and South African regions. A good example of this mono-diet that Nigerian films have become was the recent visit of Rita Dominic, popular actress, to Malawi early this year as part of DStv's promotional activities for the Nigeria film industry. Rita is MultiChoice's Nollywood Ambassador. Large crowds of adoring fans turned out to receive her wherever she went in the southern African country, placing her fame, and most importantly, Nollywood's popularity, even in sharper relief.

She had interaction with lots of people and at the press conference organised during the event, the questions asked and the manner the responses that were received showed that Malawians follow Nigerian films with keen interest. The questions ranged from her career to women empowerment and how to curb the spread of HIV/AIDS. She is clearly a role model for lots of Malawians.

Before AfricaMagic was established about six years ago, the taste of a lot of films was quite a limiting factor, the reason why the appeal of the films was limited to the home video market in Nigeria and other African countries, particularly in West Africa. The primary distribution centres for the DVDs and VCDs, the media in which these films were distributed, was Idumota Market in Lagos and Iweka Road, Onitsha, Anambra State. Physical CDs were taken from these primary distributions centres across different African countries.

The difficulty of transporting large number of CDs and eventually getting the films into the hands of people that want to watch them was a big hindrance to the spread of the films beyond the few markets that the CDs reached. With its poor network of roads, distributing films in Nigeria and across Africa was, and still is, an arduous task. What AfricaMagic has done for Nollywood is to transport the films above the difficult terrain, and into the homes of viewers, says Segun Fasoye, Head of Communications, MultiChoice Nigeria, operators of DStv.

“With its investment in technology and wide subscriber base across Africa, Nollywood films are guaranteed a continent-wide reach, greatly impacting positively on the profile of the industry, its practitioners, and Nigerians. There is no gainsaying the fact that the advent of AfricaMagic helped to expand the fan base of Nollywood across Africa,” he added.

The dominance of Nigerian films led Oluniyi Ajao to blog: “I have often wondered why MultiChoice did not name their AfricaMagic channel, 'Nigeria Magic'. The reason is very obvious to any observer: most of the content aired on AfricaMagic is either from Nigeria or by Nigerians. Not that I have anything against Nigeria and its people but I know the content could be much more diverse. After all, Africa is a continent of 54 countries and there is a wide variety of content to feature”.

In addition to airing Nollywood movies, MultiChoice has also been instrumental in helping to enhance the skills of Nollywood practitioners and grow the sophistication of Nigerian films. Apart from ensuring that the films meet certain specifications required for digital broadcast, MultiChoice has been investing in skills acquisition projects among Nollywood practitioners. M-Net was commissioned by MultiChoice Nigeria in 2007 to organise continental-wide training initiative, which led to 14 Nigerian TV interns visit to Johannesburg, South Africa as part of the skills sharing and training project.

The 14 Nigerians returned to Nigeria with a wealth of new knowledge about soap opera production. This knowledge was put to vital use when M-Net began production of its first-ever studio-based Nigerian soap opera, Tinsel. As part of the training regime, they were included in the daily workings on two popular South African soap operas, Egoli and Binnelanders. The interns learned first-hand what was required to meet the rigorous demand of a show that screens to a pan-African audience on a daily and weekly basis.

The interns, including writers, directors, producers, cameramen, costumers and sound engineers, were able to work closely with their South African counterparts in the various TV disciplines to learn more about specific TV genres that require specialist technical and creative skills. These skills will be invaluable in the production of films in Nigeria, said Mr. Fayose.

Another feat that is worth celebrating is the coming of age of AfricaMagic. In its sixth year in 2009, it has clearly become a community for Africa to celebrate themselves, tell their stories and share their joy the way no other medium will give them the time and space to do.

Joseph Hundah, Managing Director of MultiChoice Nigeria said the idea behind establishing AfricaMagic was a good one and the success it has recorded thus far is testament to the leading pay TV company in Africa continuously striving to give its subscribers premium content. “AfricaMagic was the very first channel of its kind anywhere on the continent and it has proven, every day since it began, that African audience embrace African stories.

With AfricaMagic Plus, we aim to partner with producers in east and southern Africa and to offer an additional Africa focused channel.” That was at the event held to celebrate five years of entertainment on AfricaMagic.