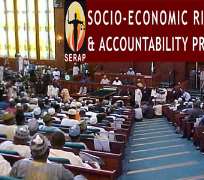 ABUJA, January 08, (THEWILL) - Following the resolution of the House of Representatives and the impending resumption of the Senate to also discuss the fuel subsidy removal problem, Socio-Economic Rights and Accountability Project (SERAP) has called on the National Assembly to “live up to their Constitutional oversight role by unanimously rejecting President Goodluck Jonathan’s decision to withdraw fuel subsidy as unconstitutional, illegal, and violation of Nigeria’s international human rights obligations.”

A statement by the organization said, “The National Assembly has a unique responsibility to see to the just and fair resolution of the fuel subsidy removal problem, not least because of its Constitutional and oversight authority to uphold the principles of human rights, democracy and the rule of law.”

SERAP also said that, “The ideal parliamentarian is also a human rights defender, and there is no better time for the National Assembly to protect justice, and stand up and be counted on the side of the vulnerable groups of the population. The National Assembly will have to take up the rallying cry with renewed vigour to hold this government to account if it is to sufficiently fulfil its sacred Constitutional oversight authority and operate as a counter-weight to the executive.

“There are several compelling reasons why the National Assembly should move swiftly to reject and condemn fuel subsidy withdrawal. Firstly, fuel subsidy withdrawal will exacerbate the worsening poverty in the country. It is discriminatory and amounts to punishing the poor at a time those in government are spending billions of naira on feeding, entertainment and generators.

“Nigerian workers are grossly underpaid, and to ask them to pay more on fuel will mean placing on them responsibility for government’s mismanagement and corruption in the subsidy system. Deliberately denying the poor access to basic necessities of life, such as essential foodstuffs, and essential primary health care on a widespread scale may amount to crime against humanity and other crimes under international law.

“Similarly, fuel subsidy withdrawal will lead to more corruption as experience has shown that the accrued revenue is more likely to be mismanaged or stolen. Corruption in the country has continued to undermine the democratic ethos, the institutions of democracy, the rule of law and the foundational values of human rights. Consequently, corruption is imperilling the capacity of this government to fulfil its obligations to respect, protect, promote and fulfil constitutional and internationally recognized human rights,” the organization further stated.


“The process leading to the decision is seriously flawed and violates the Constitution and international standards: The removal of fuel subsidy did not follow due process of law as it was done without full consultations with the affected people and communities. Also, the decision was arbitrary having not been made by the PPPRA Board, contrary to the requirements under the PPPRA Act.

“For more than 40 years Nigeria has been a global leader in oil production. In spite of revenue totalling in the billions of dollars pouring into the Nigerian federal government, over 70% of Nigerians live in extreme poverty and lack even the most basic public services. While a tremendous amount of oil revenue flows into Nigeria and belongs to the Nigerian people pursuant to the Nigerian Constitution, the average Nigerian citizen receives no benefit, either in income, infrastructure, or services, from the influx of money.”