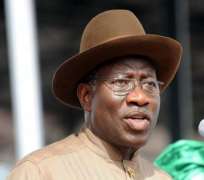 As part of last-minute moves to avert a nationwide industrial action, President Goodluck Jonathan yesterday reduced the salaries of all political office holders in the Executive arm by 25 per cent.

He also directed that overseas travels by himself and other political office holders will be reduced to the barest minimum.

He said the size of delegations on foreign trips will be reduced to the barest minimum.

In a radio and television broadcast he unfolded plans to launch a robust mass-transit programme in collaboration with the 36 states and the 774 Local Government Areas in the country.

But the President was however adamant on the removal of fuel subsidy and warned protesters against being used by mischief-makers. He then directed all Ministries, Departments and Agencies (MDAs) to cut their bloated overhead cost.

He said the deregulation of the downstream sector is not meant to inflict pains on Nigerians.

Although he was apologetic on the removal of fuel subsidy, he said the hardship being experienced by Nigerians will be temporary.

He called on all citizens to make sacrifices and assured Nigerians that his administration will work towards full domestic refining of petroleum products before the end of his tenure. According to him, “To save Nigeria , we must all be prepared to make sacrifices. On the part of Government, we are taking several measures aimed at cutting the size and cost of governance, including on-going and continuous effort to reduce the size of our recurrent expenditure and increase capital spending.”

1. A week ago, I had cause to address Nigerians on the security challenges we are facing in parts of the country, which necessitated the declaration of a state of emergency in 15 Local Government Areas in four states of the Federation. That course of action attracted widespread support and a demonstration of understanding. With that declaration, government had again signaled its intention to combat terrorism with renewed vigour and to assure every Nigerian of safety.

2. The support that we have received in the fight against terrorism from concerned Nigerians at home and abroad has been remarkable. We believe that it is with such continued support that progress can be made on national issues. Let me express my heartfelt appreciation to everyone who has expressed a commitment to support us as we strive to improve on the country's security situation, and build a stronger foundation for the future. The recent mindless acts of violence in Gombe, Potiskum, Jimeta-Yola and Mubi are unfortunate. I urge all Nigerians to eschew bitterness and acrimony and live together in harmony and peace. Wherever there is any threat to public peace, our security agencies will enforce the law, without fear or favour.

3. This evening, I address you, again, with much concern over an issue that borders on the national economy, the oil industry and national progress. As part of our efforts to transform the economy and guarantee prosperity for all Nigerians, Government, a few days ago, announced further deregulation of the downstream petroleum sector. The immediate effect of this has been the removal of the subsidy on petrol.

4. Since the announcement, there have been mixed reactions to the policy. Let me seize this opportunity to assure all Nigerians that I feel the pain that you all feel. I personally feel pained to see the sharp increase in transport fares and the prices of goods and services. I share the anguish of all persons who had travelled out of their stations, who had to pay more on the return leg of their journeys.

5. If I were not here to lead the process of national renewal, if I were in your shoes at this moment, I probably would have reacted in the same manner as some of our compatriots, or hold the same critical views about government. But I need to use this opportunity as your President to address Nigerians on the realities on the ground, and why we chose to act as we did. I know that these are not easy times. But tough choices have to be made to safeguard the economy and our collective survival as a nation.

6. My fellow Nigerians, the truth is that we are all faced with two basic choices with regard to the management of the downstream petroleum sector: either we deregulate and survive economically, or we continue with a subsidy regime that will continue to undermine our economy and potential for growth, and face serious consequences.

7. As you all know, the subject of deregulation is not new, we have been grappling with it for more than two decades. Previous administrations tinkered with the pump price of petroleum products, and were unable to effect complete deregulation of the downstream sector. This approach has not worked. If it did, we would not be here talking about deregulation today. I understand fully well that deregulation is not a magic formula that will address every economic challenge, but it provides a good entry point for transforming the economy, and for ensuring transparency and competitiveness in the oil industry, which is the mainstay of our economy.

8. As a President, elected and supported by ordinary Nigerians, and the vast majority of our people, I have a duty to bring up policies and programmes that will grow the economy and bring about greater benefits for the people. Let me assure you that as your President, I have no intention to inflict pain on Nigerians.

9. The deregulation of the petroleum sector is a necessary step that we had to take. Should we continue to do things the same way, and face more serious economic challenges? Or deregulate, endure the initial discomfort and reap better benefits later? I want to assure every Nigerian that whatever pain you may feel at the moment, will be temporary.

10. The interest of the ordinary people of this country will always remain topmost in my priorities as a leader. I remain passionately committed to achieving significant and enduring improvements in our economy that will lead to sustained improvement in the lives of our people.

11. I am determined to leave behind a better Nigeria, that we all can be proud of. To do so, I must make sure that we have the resources and the means to grow our economy to be resilient, and to sustain improved livelihood for our people. We must act in the public interest, no matter how tough, for the pains of today cannot be compared to the benefits of tomorrow. On assumption of office as President, I swore to an oath to always act in the best interest of the people. I remain faithful to that undertaking.

12. To save Nigeria, we must all be prepared to make sacrifices. On the part of Government, we are taking several measures aimed at cutting the size and cost of governance, including on-going and continuous effort to reduce the size of our recurrent expenditure and increase capital spending. In this regard, I have directed that overseas travels by all political office holders, including the President, should be reduced to the barest minimum. The size of delegations on foreign trips will also be drastically reduced; only trips that are absolutely necessary will be approved.

13. For the year 2012, the basic salaries of all political office holders in the Executive arm of government will be reduced by 25%. Government is also currently reviewing the number of committees, commissions and parastatals with overlapping responsibilities. The Report on this will be submitted shortly and the recommendations will be promptly implemented. In the meantime, all Ministries, Departments and Agencies must reduce their overhead expenses.

14. We are all greatly concerned about the issue of corruption. The deregulation policy is the strongest measure to tackle this challenge in the downstream sector. In addition, government is taking other steps to further sanitize the oil industry.

15. To ensure that the funds from petroleum subsidy removal are spent prudently on projects that will build a greater Nigeria, I have established a committee to oversee the implementation of the Subsidy Reinvestment and Empowerment Programme. I sincerely believe that the reinvestment of the petroleum subsidy funds, to ensure improvement in national infrastructure, power supply, transportation, irrigation and agriculture, education, healthcare, and other social services, is in the best interest of our people.

16. Fellow Nigerians, I know that the removal of the petroleum subsidy imposes an initial burden on our people, especially the rising cost of transportation. Government will be vigilant and act decisively to curb the excesses of those that want to exploit the current situation for selfish gains. I plead for the understanding of all Nigerians. I appeal to our youth not to allow mischief-makers to exploit present circumstances to mislead or incite them to disturb public peace.

17. To address the immediate challenges that have been identified, I have directed all Ministries, Departments and Agencies of government to embark immediately on all projects which have been designed to cushion the impact of the subsidy removal in the short, medium and long-term, as outlined in the Subsidy Reinvestment and Empowerment Programme Document.

18. Tomorrow, 8th January, I will formally launch a robust mass transit intervention programme to bring down the cost of transportation across the country. The programme will be implemented in partnership with state and local governments, labour unions, transport owners, and banking institutions, and supported with the provision of funding at zero interest rate as well as import duty waiver on all needed parts for locally-made mass transit vehicles, which will create additional jobs in the economy.

19. We will keep these incentives in place for as long as it takes. I want to assure you that Government will not rest until we bring down the cost of transportation for our people. Let me thank the transporters' associations that have agreed to reduce transport fares. I have directed the Minister of Labour and Productivity to work with these associations to come up with a sustainable plan to guarantee this within the shortest possible time.

20. In addition, I have ordered the mobilization of contractors for the full rehabilitation of the Port Harcourt –Maiduguri Railway Line and the completion of the Lagos-Kano Railway Line. I have also directed the immediate commencement of a Public Works programme that will engage the services of about 10, 000 youths in every state of the Federation and the Federal Capital Territory. This will create an additional 370, 000 jobs.

21. Government has taken these decisions in the best interest of our economy, so that we not only have benefits today, but to ensure that we bequeath even greater benefits to our children and grandchildren.

22. Let me assure Nigerians that every possible effort will be made to ensure that we march forward, with a collective resolve to build a Nigeria that can generate greater economic growth, create and sustain new jobs, and secure the future of our children.

23. This Administration will aggressively implement its programme to reposition and strengthen our economy, while paying adequate attention to the immediate needs of our citizens.

24. I assure you all that we will work towards achieving full domestic refining of petroleum products with the attendant benefits.

25. As I ask for the full understanding of all Nigerians, I also promise that I will keep my word.