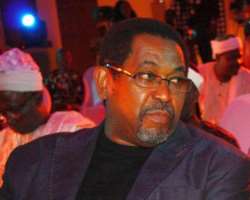 ACTOR, TV personality Patrick Doyle is now a hustler. This news is authoritative and it came from the horse's (sorry, Doyle's) mouth. The giant of a man that alighted from the plane and was no doubt the biggest human being walking on the tarmac of the desolate Calabar Airport could only be Patrick Doyle. His trademark suit and un-tucked long sleeves shirt completed the identification. Time was about 9.30am. T4T took note. Then at exactly 5pm on the same day (Monday, November 30), T4T ran into Doyle again in the departure wing of the same airport. He could not resist the temptation to ask about this newfound energy. Doyle confided in T4T that he had left everything entertainment, and that he now hustles. Well, only the actor can define his kind of hustling, but be sure that as soon as we find out, you will be the first to know why Doyle will wake up so early (at his age) and fly to Calabar and return that same day.

... Still on P. D.
IN case the P. D gets you confused, it simply means Patrick Doyle. All was well since the Arik plane took off from Calabar at about 6pm that fateful day. But that could not be said of the situation, when it eventually landed in Lagos. I think the pilot in charge of that flight needs a crash course on how to land a plane. Captain Philips, I guess, practically slammed down the plane with a heavy thud on the tarmac. In fact, the little kulikuli T4T and others ate nearly came through the mouth and nose as all passengers were jolted. T4T took a peep at P.D in the darkened bowel of the plane. His countenance will make a good act in a Nollywood film where someone just saw a ghost. Well, bros, hustler dey see many tins, I hope you don redy? Na part of the experience wey dey make am sweet be dat.