Acting is fulfilling… it pays my bills----LADI Joy Torty 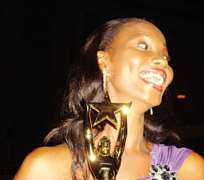 LADI Joy Torty has earned a co-star status with her portrayal of Adaku — a village beauty, who lives in two worlds in the Snake Girl, a film, which bothers on love and bravery -- with Emeka Ike in a lead role. The Plateau State-born actress not only thrilled most moviegoers with her role, she got them bathing her with a number of aliases — one of them, the 'newest jewel' on the turf. In fact, some even predicted that the former athlete, model, beauty queen and product of Mass Communication department of the University of Jos, would make a good act if handled by a good home movie producer.

True to predictions, Ladi, the former Miss UNIJOS, has somewhat emerged a screen favourite and an actress that has continued to draw admiration from within and outside the continent. About a month, the near six-footer, who currently enjoys super roles on screen and who won the Miss Northern Universities beauty pageant in 2002, a year after she emerged Miss UNIJOS, was named the Best New African Actress by the organisers of the yearly Zulu African Film Academy Awards (ZAFAA). Moviedom caught up with the actress and apart from posting a one liner to almost all the questions she was asked, the medaled athlete (she got gold medal for Kaduna State in sprint event in the 1998 National Sports Festival) would not discuss 'matters of the heart' hard as we pressed.

Congratulations on the award

Thank you. I feel honoured. It made me feel that everyone identifies with the efforts, I have put into the job. Honestly, it made me feel that the industry, the organisers of ZAFAA and my fans, so far, identify with my efforts. I thank them for the award of Best New African Actress. For me, it is a good recognition and I say so, because no one can be in this industry for years and doesn't get a nomination in any award, but when he or she gets one, it has to be in category.

You have been missing in action?

As much as I love to always be on set, I equally consider the script carefully before accepting the job, knowing that there is a lot of expectation out there. That may be why you don't get to see me all the time.

In her movie pouch

Honestly, I can't remember the number of the movies I have partaken in so far, but I would have done over 15 movies. And as per the most challenging, I would say every script comes with its challenges and I do my best to play the roles; and according to the dictates of the script.

I have heard a lot of people say I did very well in the Snake Girl. So many people think so, but I put as much effort in every job I do and have done.

Your NGO on girl child education

Oh no! Unfortunately it's no longer functioning. I have been too busy to manage it all alone. But I hope to make it better soon.

Why she dumped athletics for entertainment?

For me, what I do is to try as much as I can to achieve my goals in everything I do or had done at a given point in time. Once I have attained my goal, I move on and once I move on to other things, it means I am done with what I left behind. I was done with athletics by the time I hung my canvass for modeling and acting.

Who is she seeing and what is this talk about her and the actor Akume Akume?

Well, first of all, matters of the heart just like the one you have just asked are not meant to be publicised. I would be lying if I say I am not in any relationship, but what I won't do is to discuss it on the pages of the newspaper. So, for me matters of the heart are not meant to be publicized. As for my big brother Akume, (laughs), I will put it simply: Akume Akume is happily married. He is more like a brother to me and if you see both of us in television soaps or in movies... it's just casting that brought us together and nothing more.

Off the beat, turn-on and off

I do have a daily life and I love nature. I could be in the farm all day and may even choose to ride a horse. That is me. That is just Ladi. The only problem I have doing this, is the feelings of losing my private life. It bugs me. But I like the job, it's fulfilling. It pays my bills and I thank God. As for turn on, I love happy people and self-centered people irritate me. As for me, I see myself as cluster-phobic. Funny isn't it? And I would always want to be the woman that I am, giving an opportunity to choose a sex.

I have a forgiven spirit

It was the great loss I suffered on April 16, 1998. That was the day I lost my dad. There was simply no more motivation for me. He stood solidly behind me. So, when he died, I lost interest completely in life because he was a motivating factor.

Wow... I want to be starred in a Hollywood film and to get to the height of my career.

Of course, every young woman wants to settle down. When that time comes, you will sure be the first to know my decision.

I am an Aquarian. I was born in Kaduna, grew up in Kaduna and attended Narayi Primary School.

Hmmm ... I think it is hiding inside the kitchen cabinet and eating what I should not be eating.

I have no particular food choice. What I know is that I eat well and for me, it is not in the quantity, but the quality.