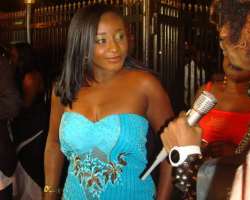 This has certainly been a year of innovation and growth for Nollywood.

Oprah, the most influential woman on television mentioned Genevieve Nnaji on her show as one of the 20 most popular people in the world, Stephanie Okereke directed and produced a film 'Through the Glass', racking in millions at the box office.

Emem Isong's 'Guilty Pleasures' continues to thrill and pull crowds of people to the cinemas to mention a few.

It seems Nollywood is not quite done with surprises… reports just reaching www.nollywoodgists.com tell us that sexy screen siren, Ini Edo has joined the ranks as the latest producer in town!

She has just co-produced and starred in a film, 'Memories of my Heart' which is set to hit our screens soon. www.nollywoodgists.com caught up with the pretty actress and she confirmed the story. 'Yes, I have just co-produced a film with my good friend and big sister, Emem Isong.

It stars Ramsey, Desmond Elliot, Uche Jombo, Mona Lisa Chinda, Nse Ikpe-Etim and myself. It's a romantic comedy and I'm sure people will like it'.

Hmm…very star-studded I see.. so who are the love interests in the movie? Hear her;

'I think I'll be giving away the story if I answered that, so I wouldn't like to say that for now, but what I will say is that it's a love story and I had a lot of fun shooting it and working with my colleagues both as an actress and as an executive producer'.

So, when should we expect to see this frothy confection of a movie that is already giving me toothache! (it sounds so sweet!)

'Before the end of the 1st quarter of next year' she quipped.

Ha! Will it be possible for viewers to wait that long?