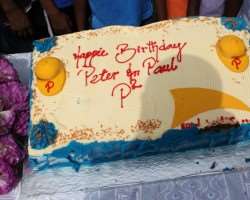 It was definitely an interesting scene as everyone admiringly watched the two painters as they practised their trade with professional confidence. The two young men, wearing white aprons and armed with paintbrushes, were completely focused on their task of re-painting a portion of the perimeter fence standing before them.

Soon, the task was over and the two labourers acknowledged with smiles, the cheers and applause from their watchers comprising children, journalists and other individuals, who were definitely excited by the impressive proficiency and artistry with which the job had been executed.

But an onlooker who merely stumbled into the scene could only have wondered why on earth a labourer should be cheered and applauded for merely doing the work he was contracted to do or why he should even have been at all watched while working.

However, mere discovery of the identities of the two “painters” was all that was required to solve this puzzle. The two were indeed neither painters nor labourers of any sort, but the internationally famed sensational twin brothers singers, Peter and Paul Okoye, a.k.a. P-Square. The duo was never contracted for any paid labour, but was only leaving a symbolic imprint at the Akowonjo branch of the Little Saints Orphanage in Lagos, following the artistes' visit to the famed orphanage for their birthday celebration, last week.

Earlier, the two artistes with their entourage had arrived the motherless babies' home at exactly 1.15pm, where they were received warmly by the obviously expectant proprietor of the home, Rev. (Mrs.) Dele George.

They were instantly led to the hall were a documentary on the activities of the orphanage was screened. This was followed by an opening prayer led by Paul Okoye before the party proceeded to the outside where the children of the orphanage joined the celebrants in cutting the birthday cake.

After the visitors were conducted round the facilities at the home by the proprietor, it was time for the celebrants to thrill the children with songs and their characteristic scintillating dance steps. The songs, I love you and E no easy were performed by them before three girls from the home took the floor to perform the popular dance track, Roll it, also by P-Square.

After this, the visitors took time to present the home the gifts they came with. These included five bags of rice, 25 school bags, 10 standing fans, beverages and toiletries, among others.

According to them, the gesture was targeted at showing gratitude to God for His favour that has seen them through so far in their career as well as remember the less-privileged in the society as “all of us are also like them if not for God's grace”.

Responding, the proprietor, Mrs. George thanked the artistes for their kind gesture.

“This is indeed wonderful and God will reward you very abundantly,” she said.