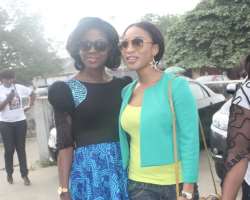 What better way to celebrate the festive season and also thank God for all he has done for you throughout the year other than show love and care to the less privileged and needy in the society. This was what multi talented entertainer and famous reality show winner Uti Nwanchuwku of the Big Brother Africa (BBA) fame had in mind when he decided to gather his friends and colleague in the entertainment industry together to a charity event organized by his fan club at Ojez on the 21st of December 2011.

The event which was solely a charitable work done to cater for the needy in the society had many celebrities, fans and friends of Uti in attendance and saw them trooping out in their numbers to donate food items and material things to the needy who had been carefully selected from different parts of the state. Among the friends of Uti in attendance were; sultry Nollywood diva, Tontoh Dike, Susan Peters, talent Nollywood actor and Glo ambassador Desmond Elliot, Actors Alex Ekubo and Micheal Okon, Music diva Goldie, soap opera stars Ajibade Gbenro Emmanuel,Moyo Lawal and Halima Abubakar, Nollywood diva,Chika Ike,former MR Nigeria Bryan Okwara and Keneth Okoli, former Gulder Ultimate man Micheal Nwachukwu, and the recently crowned Ultimate man Christopher Okechukwu, RnB star,Dipp and Lanky C.

A galaxy of celebrities who stormed the event had a nice time socializing with the celebrated children and widows by wining and dining with them and afterwards got busy by dancing to selected tunes playing by the DJ. Music Stars who attended also serenaded the celebrants with their hit songs.Dipp,Dezign. CEO of Back to black Don Amando brought along his artistes like K kenny, Benny P and Oluwemawe. Lanky C's voice was also one to remember. They all thrilled the audiences with their performances.

For Uti, this was just his way of celebrating the festive season and also appreciating God's goodness to him through the year.

The charitable event was organised mainly to cater for widows, and the physically challenged children in the society. Among the organisations which benefitted from this charitable works were; God's wife, a widow's home, school for physically challenged children Modupe Cole, school for the down syndrome kids etc. After the fun, the food and gift items were shared out to all the schools and charity homes present.

Friends of Uti didn't only come out to honour the event but they also showed their generosity by bringing along with them various food items and gifts for the less privileged and the widows who were been celebrated. Amongst the items brought by the cheerful donation were bags of rice, cartoons of Noodles, bags of salt, packets of Tin Tomatoes, packs of Toilet Tissues, pampers, bottles of drinks, bags of beans, cartoons of juice, clothes etc.

Other Notable People/outfits that supported this cause include Orode Uduaghan(daughter of Governor of Delta State) who sent down 50 Bags of Rice; Martini who recently endorsed Uti and Eku set up a mini Bar to entertain the guests. Md of GDN Alexander Kuthor made sure Matini gave it's full support. Also helping out with Refreshments was Prime Chinese as their Manager Mr Henry Udoh brought food to cater for about 30 people.

Speaking about the event, Uti says “for me I have had a very good and successful year, this year alone I have won four awards and done five movies, and also anchored many shows, so for me this year has been rewarding both financially and career wise, so I thought instead of spending on partying and getting drunk with friends, why not spend the money on people who the society has forgotten like the widows and physically challenged children who are in need and what better time to do that other than the season of love, a time of sharing.