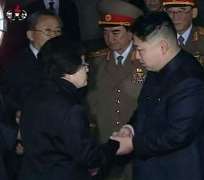 Young and untested, Kim Jong-un has all but taken over North Korea's leadership, with state media calling him "supreme commander" and "leader of the state, army and party" well before his late father was borne through the streets of Pyongyang in a state funeral on Wednesday.

Kim, believed to be about 27 years old, walked alongside a limousine carrying his father's coffin, as it set out on a funeral procession amid snowflurries.

After the reclusive state emerges from a period of mourning on Thursday, Kim, vice chairman of the ruling party's Central Military Commission, is expected quickly to take on additional titles to cement his place at the top.

"Kim will need the Workers' Party general secretary post and the supreme commander position, which require the party to meet for a full Central Committee meeting," said Yang Moo-jin of the University of North Korean Studies in Seoul.

"But he does need to be officially appointed new leader so that meeting could come in February or March, before they want to go ahead with declaring the year of the 'strong and prosperous' nation in April," Yang said, referring to a long-proclaimed national goal.

Experts who study the North's power structure say it will likely take years for the third member of the Kim dynasty to solidify his grip on the state and be able to run it without a coterie.

The power behind the throne is widely believed to be Jang Song-thaek, the husband of the junior Kim's aunt, a pragmatic survivor of the North's tradition of purge and bitter intrigue surrounding the former leader who died on December 17 at age 69.

Jang could steer the young Kim toward opening up one of the world's most isolated states that has been squeezed tight under international sanctions designed to punish it for its defiant missile and nuclear tests.

Not much is known about the younger Kim, not even his exact age, though his father, Kim Jong-il, and his autocratic regime had made preparations for the son's transition to power.

Kim was appointed as a four-star general last year and vice chairman of the powerful Central Military Commission at a Workers' Party meeting, bringing him to the forefront and in line to take over from his father.

Kim Jong-il suffered a stroke in 2008 but had recovered, and had led an active public schedule in recent months making field trips with the junior Kim often at his side.

Educated in Switzerland, he is thought to speak English and German, and bears a striking resemblance to his grandfather, the North's founder, Kim Il-sung.

Two attacks on the peninsula last year which killed 50 South Koreans, were, analysts say, aimed at winning the army's support for a continuation of dynastic rule and underscored an intent to maintain the state's military-first policy.

The young Kim is likely to follow the same militaristic path, experts say, maintaining a strong grip over one of the world's largest armies and pressing on with a nuclear weapons program in the face of international outrage.

SUCCESSION PROCESS
For added security, Kim Jong-il promoted his sister and her husband, Jang, to top positions to create a powerful triumvirate to run the family dynasty.

"Despite economic hardship, food shortages, and a welter of sanctions, the Kim Jong-il regime seems stable, and the succession process is, by all appearances, taking place smoothly," John Delury and Chung-in Moon of Yonsei University wrote in an article in April.

China prefers the status quo on the peninsula, worried that if the South takes over the North, the South would bring its U.S. military ally to the Chinese border.

CLOAK OF SECRECY
The most frequently viewed photograph of Jong-un before his emergence last year was of him as an 11-year-old. But recent pictures and footage of him show a heavy-set young man with his hair clipped short.

There is a question over whether his late mother, a Japanese-born professional dancer called Ko Yong-hui, was Kim Jong-il's official wife or mistress -- an issue that might weigh on his legitimate right to replace his father.

Kim Jong-il was very publicly named heir by his father, Kim Il-sung, but he studiously avoided repeating the process and for years none of his three sons appeared in state media.

After taking over from his father, Kim Jong-il saw his state's economy grow weaker and a famine in the 1990s killed about one million of his people, while he advocated a military-first policy.

Seventeen years later, he will likely get the same sort send-off from his people that his father did, with a carefully staged procession through the streets of Pyongyang, capping a cult of personality and seeing power move to his son.

In a book about his time as chef to the ruling household, Kenji Fujimoto of Japan said that of the three sons, the youngest, Kim Jong-un, most resembled his father.

He is also said to have a ruthless streak and the strongest leadership skills of the three as well as being his father's favorite, though his youth may also be a problem in a society that values seniority.