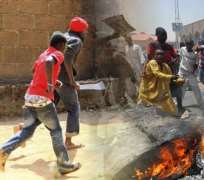 * Plateau a tinderbox of ethnic and religious rivalry

A family of four people was killed in a machete attack in Nigeria's ethnically and religiously mixed Plateau state on Wednesday, the state government's spokesman said.

Plateau is a tinderbox of ethnic and religious rivalries over land and power between local people and migrants from other areas. These often take the form of sectarian strife between the state's Christian and Muslim communities.

A series of bombings by Islamist militants across Nigeria on Christmas Day killed over two dozen people, raising fears that they are trying to provoke a sectarian civil war.

The attacks included a bombing at a church in the Plateau state capital of Jos which killed no one, although a policeman died in a subsequent shootout with militants.

"This attack is regrettable coming at a time when the state government has put ... measures for security (in place)," state government spokesman Abraham Yiljap told local broadcaster Plateau Radio Television. He gave no further details.

There was no suggestion the killings had any link to Sunday's church bombings. The radio station said the victims were Christians from the local Berom tribe and the attackers suspected to be Fulani herdsman, who are normally Muslims.

Northern Nigerian Christians said on Tuesday they feared that the Christmas Day bombings could lead to a religious war in Africa's most populous country.

However, so far there has been no violent backlash from Christian communities.

The Boko Haram Islamist sect, which aims to impose sharia Islamic law across Nigeria, claimed responsibility for the blasts, the second Christmas in a row it has caused carnage.

The most deadly attack killed at least 27 people in the St Theresa Catholic church in Madalla, a town on the edge of the capital Abuja, and devastated surrounding buildings and cars as faithful poured out of the church after Christmas mass.

Analysts say the attacks risk reviving tit-for-tat sectarian violence between the mostly Muslim north and Christian south, which has claimed thousands of lives in the past decade.

So far, however, Jos's violence has usually been driven more by local concerns than any tensions in the wider nation.