GIVE ME CHANCE TO SHINE 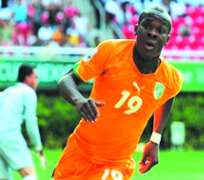 Coulibaly
Newly crowned CAF Most Promising Talent of the Year, Cote d'Ivoire's Souleymane Coulibaly, has asked the Chief Coach of his country's national team, Vahid Halilhodzic, to include him in the list of players he is preparing to win the elusive 2012 Nations Cup in Gabon and Equatorial Guinea.

Cote d'Ivoire is blessed with array of stars currently plying their trade in Europe, and Coulibaly believes his contribution would enhance the country's chances of breaking the cup jinx.

The West African nation is billed to slug it out against Sudan, Burkina Faso and Angola in Group B of the 2012 Nations Cup preliminary games.

The player, who was outstanding at the last Under-17 World Cup in Mexico, was rated above Ahmed El-Shenawy of Egypt and Nigeria's Ahmed Musa to win the African award.

Like Oliver Twist, the Cote d'Ivoire star said he's already focussing his attention on the biggest honour in the continent, the main African Footballer of the Year award won by his big brother, Yaya Toure.

'I'm glad for this recognition. All that I have achieved in football didn't come as a gift. I really work hard for it. I'm very proud of myself and my country and this award has gingered me to continue to put in my best for club and the country,' he said.

Coulibaly ended the last cadets championship as top scorer, having netted nine goals, before Cote d'Ivoire's ouster in the second round. His outstanding prowess moved him to English side, Tottenham Hotspurs.

The player is determined to rise to the top of his career, he believes that the successes achieved by a player like Samuel Eto'o didn't come as a fluke, as he promised to always get better every season.

He also paid homage to Chelsea's players, Didier Drogba and Salomon Kalou, and Manchester City's defender, Kolo Toure for making him the player for the future.

Coulibaly began his international career with Cote d'Ivoire national Under-17 football team at the 2011 FIFA Under-17 World Cup.

He has received the label of the 'New Drogba' in reference to fellow Ivorian star.