Barcelona's Villa Out Of Hospital After Leg Operation 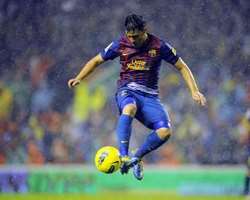 Barcelona forward David Villa has been released from hospital five days after an operation on the broken leg he sustained in this month's Club World Cup, the Spanish and European champions said Saturday.

"This means the Barca number seven can spend the Christmas holidays with his family," the La Liga club said on their website (www.fcbarcelona.com).

Spain international Villa, the world and European champions' all-time leading scorer, is expected to be sidelined for up to five months, putting his participation at Euro 2012 in doubt.

He broke his left tibia playing in the Club World Cup semi-finals in Japan and doctors said the 30-year-old had been suffering from a stress fracture.

They said Monday's operation had been gone "fantastically well."