We have no security here---- Rita Dominic 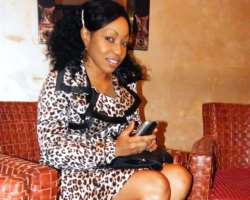 'A queen must not be seen as weak in the face of travail,' Rita Dominic says to the director on the location of a movie, shot in the hinterland of Asaba – a 45 minutes drive from civilization. The director, a bulky man in a white vest and faded jeans nods. The script will be amended immediately to correspond with common sense. 'The movie is good, but the dialogue reads like an elementary text book,' she tells me in the dresser with the costumier and makeup artiste fussing delightfully about her.

There are piles of costumes and accessories littered all over the small room; glittery lace fabrics sewn in outlandish styles, and exciting beads and chains fit for Rita; except that when she puts them on, they hang like casual nightdresses. Rita has obviously lost some weight and she looks more beautiful than ever. Her skin is like the lightest touch of caramel in a rich and breathtaking hue. She stands out in a crowd. Her flawless complexion is simply enchanting to viewers. The costumier is a little agitated by the gauche look of the dresses and states that the last time she had worked with the actress, this was a perfect size; and that was 2 years ago! Imagine what a simple call to get her exact measurement would have done to save the situation. But help is near as all the clothes, except one, are bundled to a tailor nearby. Rita gets set for her first scene in an intense blue lace sewn as a ruffled blouse and fluid skirt latching on to her hips.

The scene shot in a plain bedroom is brisk, and we see Rita speaking kindly to one of her maids as another trails from behind. The lights are made subtle with beam protectors. The DOP is a lanky man with a penchant for professionalism; the producer is a dark young man with a glow in his eyes. He is happy with his work, it seems. You can tell by the way he prances here and there, cracking a joke, smiling to fellow crew members, or just trying to make Rita very comfortable. She is his biggest star in this movie; next would be Mercy Johnson, Adaora Ukoh and the Ghanaian act – John Dumelo. And together they bring the shine out of the startled minors and make the film one worth watching.

Rita is a queen married to a philandering king (Dumelo); Mercy is the mistress who makes Rita's life miserable. Thanks to Rita, her fine-tuning of the script enhances the scenes.

The Executive Producer walks in, hugs Rita and smiles to everyone. He darts from one end to the other and then allows the production go unhindered. He finds time to chat with one of the minors…

The DOP captures a scene so beautifully he gets a 'well done,' from the director.

The dresses arrive, now styled to suit Rita's figure. I am in love with one of them, a bright yellow lace embedded with gold sequence, sewn into a dress with chic flattery pleats. Rita thinks they are 'wearable' now; the costumier heaves a sigh of relief.

A little girl walks into the dresser and smiles at Rita. She would be playing the role of her daughter, the princess. She thinks highly of Rita, and is excited to try on her own costumes.

Set food for that afternoon was eba and egusi soup. I relished it with the hunger of a child. As the scenes lingered so did the hours, as night sneaked in subtly on us. By this time the boom-man was complaining of toothache. Dinner was jollof rice, and while Rita and her 'daughter' had theirs on set whilst shooting a scene at the dinning table, we relished ours behind the camera. Night came and despite the resistance of the production crew, Rita was adamant the shoot should come to an end, for the day.

'We have no security here; we are vulnerable and naked, and at a time like this with kidnappers on spree, it's only wise that we close work well on time before the wicked embrace the dark,' she says.