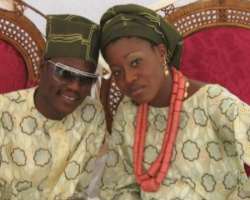 Sound Sultan and his wife
Listen to article

Sound Sultan and his wife Farida have announced the birth of their first baby.

The couple, who got married in Lagos on Thursday October 1, were blessed with a baby girl today.

Sources close to the couple told nollywoodgists.com that the baby was delivered at Ituha Hospital in FESTAC Town, Lagos.

Farida, who's formerly known as ChiChi (before she converted to Islam and adopted a Muslim name) was already very heavy when she exchanged vows with her partner in the traditional ceremony held in her parents' home last month.