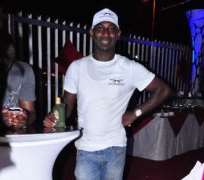 The ownership tussle rocking fun place Chrome has made a scape goat of someone.

Ladi Akindele, part owner of the place is to spend christmas and new year in police custody.

This is based on direct order from an Igbosere magistrate court.

Ladi was arraign in court on Thursday December 23 2011.

This was after spending almost a week at Alagbon.

He was arrested and arraign in court on matters bothering on criminal conducts.

Part of the reasons the court refused to give him bail was traced to resisting arrest and threatening law enforcers.

Sources maintained that Akindele had dodge police enforcers that visited to invite him for questioning after out rightly shunning police invitation. He later resisted arrest in a manner that almost led to breach of public peace and violent conduct had the police not down played the situation.

His present ordeal is traced to the dud cheque of N15m he issued to his partner, Mr Charles Ahize. And also attempted assaults on Ahize and bodily harm on his associates when Akindele forcefully took possession of Chrome after he was sacked by Ahize.

Ahize had claimed Akindele breached all terms of agreement between them and owed N15m in unpaid earnings before kicking him out.

Akindele had reacted by storming the Victoria Island, Lagos site of their joint business with area boys and forcefully taken possession.

The police had waded into the matter- and brokered a tensed compromise for them to continue running the club together.

The truce had lasted till Ahize travelled to his home town- for his mother's burial- and returned.

He had immediately gone on the offensive by seeking for the arrest of Akindele for fraud- he tendered the N15M dud cheque as evidence.

The outcast son of Ibadan billionaire Chief Bode Akindele had countered Ahize's move writing a petition of threats to life and harassment by the police to the inspector general of police.

The police high command had invited Ahize and Akindele to Abuja to clear the matter- Ladi shunned the gesture while his estranged partner attended.

The chain reaction that trailed his action is his current state as guest at Alagbon till after new year.

The court remanded him in police custody till January 21 2011- the next hearing date.

Sources claimed the court also advised the case be transferred to a High court for proper handling.

Sources claim with Ladi in Prison- Charles Ahize is now fully in charge of Chrome, for now.