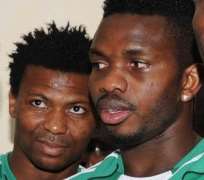 Stephen Keshi has warned ear-ring wearing members of the Super Eagles to dispense with that habit or risked being dropped from the team.

The coach, who contended that such attitude did not reflect well on moral and mental discipline, said wearing ear rings would counter his intended new and purposeful identity of the team.

“If we were Indians, I would understand, because it's part of their culture but wearing ear rings by men is alien to Nigeria and no player is permitted here to wear them,” ordered the Eagles coach, who succeeded Samson Siasia after Nigeria failed to qualify for the Nations Cup for the first time in 25 years.

It follows then that the likes of Skipper Joseph Yobo, Osaze Odemwingie, Victor Anichebe, Chibuzor Okonkwo, Peter Utaka, Brown Ideye, Dele Adeleye and out-of- favour Obafemi Martins will have to do away with their trade mark-use of their expensive jewelleries- if they are call up to camp by Keshi in January.

Keshi, who harped on discipline and warned against playing to the gallery, said he would tolerate any act capable of misrepresenting the image and posture of the team.

“We're in for serious business, because we want to return our country to the top and any player not ready would be shown the exit door. I will not quarrel with any player but anyone who flouts camp rules should pack his bag and leave the camp before I react negatively,” he warned.

Peoples Daily Sports recalls that Keshi is not the first national team coach to insist on proper grooming as several players like Eric Contona, Nicolas Anelka among others have lost opportunities to represent their countries because their national coaches insisted on their doing away with weird hairstyles.

Besides, Emmanuel Adebayor had to trim his bushy hairdo to comply with Jose Mourinho's demand before he could lace boots for Real Madrid.