I am married to many wives – Jesse King 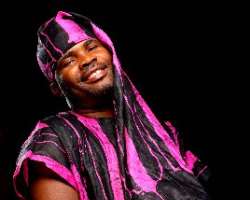 Jesse King is one of the musicians who have been keeping the African culture alive, using the Yoruba language. Recently, he was involved in a row with his record label, after which he decided to do his thing alone. He speaks with Hazeez Balogun about it all.

Jesse King is a unique artiste, what exactly is he about?

I am a cool headed man who always likes to work in my own way. I like doing the right thing, and as an African musician, the right thing to do is to sing African songs. It's true that our music is evolving and listeners want something fresh. That does not meant that we should leave our music, instead, we can re invent it to suit modern times. And that is what I am doing. Originality is also my watch word. I like a lot of our traditional musicians, but if you listen to my own songs, you will find out that they are unique. You will not find anything stolen from anybody. My songs are 100% my own.

It has not always been music for you, when exactly did you start?

It has always been music for me. I started to show traits of a performer at the age of three. My father is a clergy man and I had been farmiliar with musical instrument since I was a little child. I later graduated to the church choir, where I learnt how to modulate my voice.

Later I started working on my own music. Not that I don't like hiphop like most are doing these days, but, I have this love for traditional music. I see people deviating from it, so to me I had fallow land all to myself. Let them do hiphop, I will stick to traditional music. The competition is less.

What is the concept behind the Jesse king and the queens in the palace?

That is the concept I am yet to explore. I am still working on it because it is a very big project. It is going to be a 100 percent African hang out where people can come and have fun. It will be like a palace of Jesse, and there will be his wives all around him like the traditional setting. Food will be served just like it's done in the local way. The seats and every other furniture will be strictly African. The idea is that, once you step into the palace, it is like you are stepping into the past. It's like you are back in the days when there was no technology.

And I think it will be good, because today our children are being cut out from their roots. They hardly know some of our foods. Also it will help our tourism.

Tell us about your cap, it is unique in shape

That is what I use to show people that I am a proper Yoruba man. The cap stands me out anywhere I am. It is a traditional Yoruba cap, usually worn by royalty, and highly placed people in those days. Wearing the cap only complements my King status. When I was in New York, all the white people and also the black Americans were all over me. Some were taking my pictures and autographs even when many of them didn't know who I was.

Oh, you already know that. Jesse King has a lot of wives in his harem. There is still a lot of room for those who want to join. It is an African thing.

What happened to you and your label?

We had a deal of three years to release three albums. After three years, we were able to release just one album. I don't know why the label refused to record more, probably they had no fund to do so. But the truth is that, after that the three years with which we agreed on has elapsed, so we have no deal anymore. If they want us to still work together, I am still here.

This is also added to the fact that my album was not well promoted. Even I as a brand am not well packaged. For one, no press conference was done for me. But I don't need to wait for anyone to do anything for me. I had to promote my songs myself. All my international shows were organised by me.

When you started off with the label you were more like friends, today you are fighting each other with lawyers....

...Why will I not get a lawyer? I am not mad. When we started off they brought out papers for me to sign. They did not do it as if it is paddy paddy, they made it legal. There is nothing friendship in business. When it comes to business, you have to make it legal in case things like this happen. If you go through the contract, you will find out that everything in it favours the label, but I as an upcoming then had no choice. I know where I am going.

Is it true that your song sold a platinum in the U.K

Yes o, they really bought my song in London, but the truth is that most of what they sell is pirated copy. There is no other way to look at it. The label did not tell me that they were going to sell in the U.K. They did not tell me how many copies are in circulation, if there is at all, so I think I can say that it is pirated copies that they were selling in the U.K. The troubling thing is that the C.D. jacket has the name and phone number of the label. I'm sure it is well pirated. I don't want to believe that the label went behind me to sell the record in London without my consent.

Funny enough the album was well received. A lot of people bought it. And the thing is really expensive. One C.D was sold at 15 pounds. That is over three thousand Naira. When in Nigeria, it is just 100 Naira.

So you are saying that the label does not have the right to sell their product anywhere they like?

They have the right to sell it anywhere, but the work does not wholly belong to them alone. They need to consult all the parties involved, especially me the artiste who sang the song. Imagine how much they will be making in the U.K when they sell at 15 pounds. I have not received any percentage on my work despite what we signed.

How did you join your label?

I met with Mr Ope Ogunbanwo when I was still a banker. I went to his studio to check someone. So I think he heard me speaking with someone and he liked my voice. He asked if I was interested in doing voice overs. That was how we met. Along the line we thought of the idea of doing music.

He later set up his own studio. It was there we were together working till we finished the Buga album. From there he signed me on to his label.