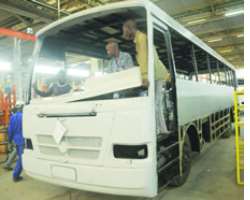 • The local made Volkswgen workshop
Decades after the German technical partners pulled out of Volkswagen of Nigeria, leading to its eventual shut-down, the auto plant, located at Ojo, Lagos, is set to start making vehicles again, following the rejuvenation of the decrepit production facilities by the new owners.

But this time, the re-jigged and modernised plant will start with the production of commercial vehicles to satisfy the rising demands for strong and affordable buses by transporters, as well as boost governments' mass transit schemes across the country, as part of its contribution towards rapid socio-economic transformation.

Hints of the latest development at the plant which used to produce mainly passenger cars up to the 90s, were dropped recently by the Managing Director of VoN Automobiles Nigeria Limited (the new owners of the company), Tokunbo Aromolaran, while commenting on the update of the facility which  commenced many months ago.

Aromolaran said VoN Automobiles has been investing a lot of resources towards ensuring that the plant bounces back very soon, adding that the first batch of Ashok Leyland brand of commuter buses built at the complex would be unveiled in a couple of weeks with eyes on both the local and sub-Sahara Africa markets.

He said: 'We are doing everything possible to change the face of the plant and replenish all obsolete lines of the comatose company to produce made-in-Nigeria Ashok Leyland range of commuter buses.

While also recalling that the company inherited mere carcass of the moribund Volkswagen plant, Mr. Aromolaran said the resuscitated plant has attained 75 percent completion and would be ready in few weeks to roll out the first batch of made-in-Nigeria Ashok Leyland commercial vehicles from completely knockdown components.

'We are pleased to also announce that our company has received sizeable quantity of knockdown components from Ashok Leyland to begin the first phase of production, which expectedly, will lead to the production of the first batch of buses in a couple of weeks.'

He added that the company's marketing team has commenced upbeat marketing strategies to exploit markets in the Economic Community of West African States to boost the capacity utilization of the Lagos based plant.

VON Automobiles has installed capacity for 1000 buses annually and is capable of providing job opportunities for various technicians and artisans, Aromolaran said.

'Besides, we have commenced talks with local content producers whom we will be partnering with to supply locally made components in a scheduled phase substitution of imported components from Ashok Leyland India.'

He said: 'Our vision is to attain at least 75 percent of local content in the next five years by gradually depleting the proportion of more than 4000 components imported from the parent plant abroad.' Mr. Aromolaran said talks had begun to seek the consent of the Lagos State Government to endorse the assembly plant as 'Centre for Automotive Engineering.'

He however dismissed insinuations currently making the rounds that VON Automobiles Nigeria Limited usurped some dealerships' stakes, explaining that 'In the five decades' history of Ashok Leyland, it has never appointed an exclusive dealership for its products in any region and neither has it one in Nigeria. There are as it were, four Ashok Leyland marketers in Nigeria,' he recalled.

'If we are not in sync with Ashok Leyland, the company wouldn't have given us kits and CKD (Completely Knockdown Components) sets for our assembly plant. We have a tripartite agreement with Ashok Leyland India to assemble, distribute and provide after-sales service support for her products in Nigeria.'

Mr. Nujum Riyaz, Country Manager, Ashok Leyland India acknowledged the joint arrangement with investors in Nigeria to localise the production of Ashok Leyland commuter buses, remarking that the buses would be forthcoming when assembled locally.

Riyaz who was one of the project managers involved in the planning and implementation of Bus Rapid Transit Scheme (BRT) in Lagos said private sector operators were carefully integrated into the scheme to make the project a viable business model for commuter bus operators. 'And today, the initiative has become the toast of other West African countries,' Mr. Riyaz affirmed. Meanwhile, Mr. Prakash Kharat, Plant Head, VON Automobiles has reaffirmed the commencement of technical training for the locals, saying, 'we have started phase training of technical personnel to acquaint them with our vision and scientific proficiency to build Nigeria's first wholly indigenous large capacity commuter buses.' One of the plant's motivations is to become Africa's foremost automobile company, behind South Africa and Egypt, Mr. Kharat asserted.

He said in the next phase of production, the plant would explore the production of light commercial vehicles and saloon cars. Some of the departments that have been completed and are in operation are the five paint booths, shower test spot, under bus test, stretch panel section, brake test porch, and the press and fibre glass shop.

Meanwhile, the construction of a network of pressure air that would serve the entire plant is also nearing completion, while the administrative quarters and cafeteria are being refurbished.

No fewer than 520 units of Ashok Leyland Falcon City buses are currently in operation in Nigeria.

They include the 220 Falcon city buses in the Bus Rapid Transit mass transit fleet in Lagos State and LAGBUS Bus Franchise Schemes. Others are in various locations including Port-Harcourt and Abuja, Federal Capital.