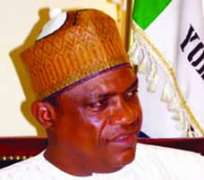 Gov. Gaidam
Yobe  State  Governor, Ibrahim Gaidam,  has declared that the tremendous transformation of infrastructure in the state, has been made possible by  fiscal discipline  and  unshaken commitment of members of his cabinet to service delivery. At an interactive session with newsmen in his country home, Bukati, in Gaidam Local Government Area of the state, Governor Gaidam justified the multi-faceted projects being embarked upon in  the state as he assured that none would be abandoned.

I can assure you that by the end of this tenure in 2015, people would get to see that we have completed all those projects on ground by the grace of God. We are not in a hurry but we have our direction and we are focused and let me add that we know what we are doing, we know our capacity, Insha Allah, we would achieve our objective. In 2015, you will see wonders in Yobe.''

You are a member and leader of the All Nigerian Peoples Party and people have expressed concern over dwindling fortunes  of your party.

Do you sometimes get worried that the party might become extinction or are you thinking of dumping the party for another platform?

My great party,  the ANPP is still and remains my party. I have not and would not neglect the party or whatever. I am happy that you asked that question; actually many people have the belief that I have abandoned the party or I am planning to shift to another party. I can assure you that I will be the  last person to leave the ANPP. I am not going anywhere to any other party. When you see me, leaving ANPP to any other party, it would then mean that it is a collective agreement or collective arrangement among the party stakeholders. Otherwise, on my own, you cannot hear that Gaidam has shifted base from ANPP to the PDP. I am absolutely an ANPP man and I would continue to be so.

We were told that the 200-bed hospital project has been completed, when will  the government put the project to use? Again,  it is one thing to put up a structure and another to manage it, how prepared are you to ensure you have adequate and well-remunerated  personnel, considering  the fact that you have to include the service of doctors, nurses to help you?

We have completed the 200-bed hospital and ready to put it  to use any time from now. We are now thinking of two ideas on what to do with it. We have two options. Actually when we came in, we conceived the idea of the specialist hospital or expanding the existing ones and we settled for the construction of a new one.

We wanted it to take care of other cases that the existing hospitals could not handle.  When we came in, we conceived the idea of onstructing another hospital, we did not think of expanding the existing ones. When I became governor in January 2009, the idea of constructing the 200-bed hospital was conceived during the administration of my late boss of blessed memory. When I took over in January 2009, I felt I should go ahead to complete the 200-bed hospital in Damaturu and simultaneously I wanted to ensure that the existing one, that is the Damaturu Specialist Hospital be expanded. We put in a lot of structures in the specialist hospital, the maternity ward, both of them on the specialist hospital premises in Damaturu.

But with this 200-bed hospital, I was just discussing with the Vice Chancellor of Bukar Ibrahim University, who is also here with me. We have two options actually. We either allow it to be an ultra-modern hospital, that is one option and the other obvious option is that we make it a teaching hospital. That means the University will introduce a College of Medicine and use it as a teaching hospital. This is one of the options we have been thinking of.

I think that what is going to happen is that I am going to table it with my State Executive Council. My thinking is that instead of allowing it to be just a Specialist hospital, we would embark on the expansion of the existing general hospitals and then we convert the 20 bed Specialist hospital to a teaching hospital in Damaturu and since we have put a lot of structures in the University, the hospital will now be College of Medicine of the Bukar Ibrahim University. This is one of our plans.

We have seen some of these projects, very big ones.  I don't know if your government took loan from outside the country to prosecute these projects.

Let me state it clearly that all the projects you went and inspected and the ones you could not go to due to time factor, we use our money, our statutory allocation from the Federation Account to construct them.

It is a question of prudency. Number one, I want you to put on record that I am an Accountant by profession; I was taught to be prudent. We were also taught proper planning in the execution of projects. So, the little knowledge I have gained in the University and my working experience is actually guiding me in being more prudent in the management of the scarce resources we have.

I want you to realise that, it is not only the statutory allocation we are receiving that is coming to Yobe. From time to time the federal government gives to each state some amount of money in form of augmentation. That augmentation or sometimes if there is savings from excess crude oil account, maybe on quarterly basis or whatever, they give us some amount of money ranging from two to three billion naira to do capital projects. So, we properly plan for our projects and whenever we  are told that some amount of money ranging from two to three million is coming to us let us say in January, before the January time comes, we would plan properly on our various needs based on our existing budgetary provisions. We allocate some money which is yet to be received from federal government and the moment the amount is received, we apply them.

In the last two weeks, we sat down in our executive council meeting, we awarded contracts amounting to about N20 billion and as I am talking to you now, in the last two days we have paid the various ministries for onwards submission to the various contractors. They agreed  on advanced payment in respect of the contractors so that we do not owe them a kobo.

In all our ongoing projects, any contractor with an outstanding Certificate of Valuation (CV) for us to pay him, whenever they bring the certificate, let's say like today, I can assure you that we will pay them between next tomorrow or the day after. Anything we give out as contract, we have the plan for it as the money has been provided for and it is there. We have our projected income, we don't overshoot our expenditure. This is the secret behind achieving all these projects you have seen that we are embarking upon. It was due to proper planning. We have never taken loan for any project.

Having gone round, your Excellency  strikes  me  as someone  who is so much in a hurry. You are just coming in less than four years you are so much in a hurry, what is giving you this spirit to hurry up things? Do you think you will be able to manage all at the same time?

Well, I would say that it is not about being in a hurry and we are not in a hurry but just doing what we are supposed to do as a responsible government because whatever we are doing, it is based on our budgetary provision and we know that we are going to fund all these projects we embarked upon.

I can assure you that by the end of this tenure in 2015, people would get to see that we have completed all those projects on ground by the grace of God. We are not in a hurry but we have our direction and we are focused and let me add that we know what we are doing, we know our capacity, Insha Allah we would achieve our objective. Come 2015, you will see wonders in Yobe.

We want to know how much it has cost you to set up the  state University.

When I assume office in 2009 as the governor of Yobe state, I think the University had only few classes, not more than five or so and a hostel. All the structures we now have at the University came up between June 2009 and now. We did not take any loan. All  what we did are there are in budgetary provisions. Each year, we allocate one billion naira in addition to the assistance from the Education Trust Fund which is about N200 million.

We give them N51 million monthly from the local government and we also meet our obligation of giving them N1 billion annually apart from the little money they have been receiving from ETF. This is how we have been funding the University.

Even though we have seen one of the industries, I do understand that there are some industries that are yet to be resuscitated .

Do you have any plan for them?
The industries you are seeing in Damaturu, we met some of them on ground. That is, we inherited them from the previous administration of Bukar Abba Ibrahim. I must confess that maybe those industries were conceived and executed without proper visibility studies. That is my assumption.

These are the kind of companies that if you go to places like Ibadan, Lagos, Kano are owned by ordinary people. It doesn't require a big capital to establish this kind of project. If it were my government I would not establish them. In spite of that, we are considering that some of the machines need a little bit rehabilitation. We are going to rehabilitate and then sell them to whoever is interested in running them. This is our plan. We shouldn't run this kind of industry as government.

So, if we want to establish an industry we have Dafarda Spring Water in Gulani local government area, we are going to rehabilitate that one because we have conducted the visibility study, when that one was established I was the Permanent Secretary in the Ministry of Commerce.

It would earn the state government some revenue. We are going to rehabilitate it and put it to use as well as the fertilizer company.

These are the only two viable industries for government that we have, but those ones you must have seen in the industrial layout, we are going to sell them off.

What are you doing to address the security challenge facing the state?

It is not our responsibility actually. The only thing we are doing is that whether the police or army that have been posted to Yobe state, we give them as much as possible, some allowances in form of incentives to make their work easier for them. We augment the federal government efforts by giving them some allowances and some logistics.

Since we came in 2007 to date, we gave them Hilux Toyota, four Wheel Hilux Toyota double cabin and some buses running to 139 in number from 2007 to date. So, we have tried our best, we have given them maximum cooperation, whatever they require from us we give them as much as possible even though it is not our constitutional responsibility actually.