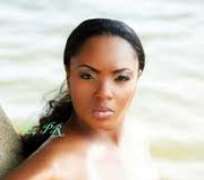 Star actress,Chioma Chukwuka and mother of 2 is on location for her own movie.

The storyline of the film revolves around forgiveness;about a Pastor who loves God so much but neglected his family.