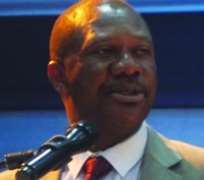 • Opara
As the Federal government continues its programme for the privatization of the power sector, the Electricity workers have reiterated that it may be an effort in futility if government fails to pay all their full entitlements, even as they denied stalling the biometric process.

The workers under the aegis of Senior Staff Association of Electricity and Allied Companies (SSAEAC) and National Union of Electricity Employees (NUEE), stated at a Send forth programme organized for past National Executives of SSAEAC in Lagos last week that the two unions were never against the biometric process initiated by the government towards paying the 50% arrears.

The National President of SSAEAC, Comrade Bede Opara said that though the government went in contrary to the appliance of the biometric, as it was earlier agreed that it would be applicable only to the casuals, he affirmed that labour would support any process that would ensure that the workers get their full entitlements.

'As much as we want to believe the government, we have discovered that there are so much insincerities on the part of government in the implementation of many agreemenst we have had in the past'', he said. Comrade Bede said that the Union was never against reformation of the power sector, but only against total privatization which would further destroy the sector as have been observed in most other government establishments privatized in the past.

''What we are advocating for is liberalization of the power sector and not privatization as being touted by the government. Daily Times was privatized, where is the paper today? Rather the compound of the organization is now being used as a ware house, that is a big question, we don't want that fate to befall our organization'', he stated.

The Labour Leader warned that the union would not compromise the workers interest, vowing that the leadership would ensure that everything belonging to workers is paid irrespective of the process taking by the government to sell PHCN. The General Secretary of NUEE, Comrade Joe Ajaero, also added that the union was resisting the government from the position of knowledge reiterating that privatization can never be the best option available in solving the epileptic power problem in the country.

He challenged President Jonathan and the Minister of Power, Professor Barth Nnaji to tell Nigerians where private sectors have succeeded driving the power sector of a country.'The problem we have in the country is that our leaders are being dictated to by countries like America. But America that is dictating to us is in deep crisis,'' he said.

On the eventual privatization of the sector, NUEE general Secretary said; ''If they captured us, there is one thing they cannot take away from us, our labour, benefits, arrears, and entitlements are not negotiable''. He lambasted the government for condemning the act of strikes by the workers noting that this is the only weapon available to workers worldwide to express their discontentment against the infringement on their rights by the government or insensitive employers.

The event was equally used to raise fund for the building of the SSAEAC ultra modern secretariat in Ikoyi, the project which is expected to be completed in twelve months.