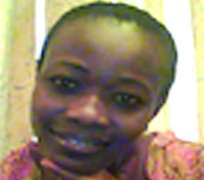 • Onwuka
Cynthia Chika Onwuka, a lawyer is the Founder/ Executive Director of Women Rights & Empowerment Initiative (WORI), a non-governmental organization based in Nigeria. She has avid interest in the rights of women & children and democracy/governance.

She worked for several years as a Programs Officer, in the area of Women's Human Rights, with Women Aid Collective (WACOL). Onwuka coordinates a network of lawyers who provide pro-bono services for vulnerable children in conflict with the law and indigent women in Rivers State.

Onwuka is the pioneer coordinator of Rivers State Child Protection Network (CPN), a network of NGOs that work for the protection of children's human rights. She contributed immensely to the establishment of the body across the States of Nigeria. She coordinated the successfully implemented UNICEF-funded project 'Engendering a Protective Environment for Children in the 2011 elections (EPEC 2011)'.

In July 2011, Onwuka participated as a delegate in the capacity enhancement training organized by the International Centre for Parliamentary Studies (iCPS) London, United Kingdom where she earned a Professional Qualification in Electoral Affairs.

The Universal Declaration of Human Rights (UDHR) adopted by the United Nations General Assembly arose from the experience of the Second World War and represents the first global expression of human rights. Article 21 (1) of the declaration provides that everyone has the right to take part in the government of his country, directly or through freely chosen representatives and (3) provides that the will of the people shall be the basis of the authority of government; this will shall be expressed in periodic and genuine elections which shall be by universal and equal suffrage and shall be held by secret vote or by equivalent free voting procedures.

The above provisions and all others in the UDHR are merely declaratory without any binding force. They are standards which states are encouraged to achieve. The need to achieve binding force and global acceptance of the UDHR resulted to the elaborate re-enactment of its Articles in subsequent international instruments and national laws; thus the UDHR serves as the inspiration source for a growing number of international, regional and national instruments protecting and promoting human rights.

In 1966 the General Assembly adopted two binding Covenants – International Covenant on Economic, Social and Cultural Rights and the International Covenant on Civil and Political Rights (ICCPR) – which with the UDHR complete the International Bill of Human Rights and have the force of international law. Article 25 of ICCPR, a re-enactment of Article 21 of UDHR, provides that every citizen shall have the right and opportunity to take part in the conduct of public affairs, directly or through freely chosen representatives. Regional and sub-regional instruments, such as the African Charter on Human & Peoples Rights and the 2001 Protocol on Democracy & Good Governance of the Economic Community of West African States re-enforced these principles and propagate democracy and popular participation in governance through elected representatives.

In a bid to meet the demands of its people and satisfy their obligations, international and regional, African states are increasingly embracing, as an ideal, the system of representative government. Nation states incorporated and elaborated on these frameworks and established institutions charged with the responsibility of ensuring observance and implementation of activities geared towards the achievement of these obligations.

In Nigeria, these provide the cornerstone for the eventual incorporation of provisions of the international laws. The provisions in ICCPR and UDHR are incorporated in the Amended Constitution of the Federal Republic of Nigeria (CFRN), 2011, the grundnorm of the State which takes precedence over all other domestic laws. Section 1 (2) CFRN provides that the country shall not be governed, nor shall any person or group of persons take control of the government of Nigeria or any part thereof, except in accordance with the provisions of the Constitution, while Section 14 (1) established that Nigeria shall be State based on the principles of democracy and social justice.

Globally, election management bodies face the formidable challenge of ensuring that stakeholders have trust in the electoral process. The identification and adoption of best practices in electoral framework and administration among nations have resulted in internationalization and continues to place countries under pressure to introduce electoral reform measures.

The relatively recent development of generally acknowledged standards for 'free and fair' elections and of global and regional standards for electoral administration have created yardsticks by which each country's electoral processes and administration can be assessed. While many electoral reforms are initiated by governments, at times in response to societal or external pressures, Election Management Bodies (EMBs) themselves have often been powerful motivators of electoral reforms.

More widespread public accountability and transparency of EMBs - a significant reform in itself - has had a multiplier effect on further electoral reform. Materials supporting electoral reforms have emerged from the increasing use by EMBs of election audits, and from the advocacy activities of civil society organizations and other stakeholders. By virtue of its powers, functions and responsibilities as provided in the Amended Constitution of the Federal Republic of Nigeria 2011 (CFRN) and the Electoral Act 2010, Independent National Electoral Commission (INEC) has powers to make rules, regulations and determinations which are binding on all stakeholders in the electoral process.

It is my view, therefore, that no worthwhile reform can be made without INEC driving the process, making considerable inputs and/or sharing in the ownership. The right time to kick-start this reform process, in readiness for Nigeria's 2015 elections, is now. Implementing these recommendations would contribute towards making the Nigerian Electoral Process a model among other nations. It is imperative for us to build on the successes achieved and make the needed reforms to bridge gaps observed in the 2011 electoral process.

The CFRN confers an advisory role on SIEC over INEC. Though both Commissions, at the Federal and State levels are expected to complement each other's activities, INEC, being a Federal agency should be empowered to exercise supervisory roles over SIEC. This would go a long way in putting the Commissions at the State level on track.

Funding the needs of INEC are dependent on the electoral cycle and vary greatly between election and non-election years. With the new system that makes funding for INEC first-charge on the Consolidated Revenue Fund, the Commission has considerable ease in accessing fund for its activities, as was observed during the 2011 elections. Releasing needed funds to the Commission to commence implementation of key activities during this non-election period would be of immense benefit to our electoral process as it would get Nigeria better prepared for the 2015 elections.

Constituency delineation, a politically divisive issue, has the potential to leave the Commission open to politically motivated attacks by those who perceive the result as not serving their interests. The exercise is dependent on considerations, including population size of the electorate as reflected on the register of voters. The register generated from the last voter registration exercise and used for the 2011 elections, is fraught with irregularities. It would, therefore, be misleading to rely on the record for this sensitive national exercise and others. Further, the task of constituency delineation is demanding and involves divergent skills and competencies. INEC does not have the expertise, staff strength and political will to effectively carry out such a sensitive assignment.

However, it is possible to collaborate with other agencies for the exercise. INEC should collaborate with the National Population Commission (NPC) which should be directed to conduct an aggressive birth registration exercise. The statistics generated should be made available to INEC to aid the Commission in delimitation of constituencies. This will also aid in checking incidences of conflicts associated with age verification during polls and other national exercises. The Commission should regularly compare its voter registration records against the population register to identify unqualified or 'phantom', voters for de-registration.

This is an activity which implementation could commence in this non-election period. The basic need in compilation of the voters register is to ensure accuracy and credibility of data contained in the register. In furtherance to this, INEC should be directed to compile, maintain and update the register of voters on a continuous basis. This would, in future, make voter registration exercise less chaotic and inexpensive when compared to the 2011 general election.

The recorded improvement on the use of the Direct Data Capturing (DDC) machine for the voters' registration should be maintained. Effort, however, should be made to ensure that the DDC devices are made effective in checking irregularities in the voter registration process such as multiple registration, registration by proxy as well as widespread registration of minors. Further, the device should be used during voting to check impersonation by voters.

There should be a comprehensive & timely public verification of the voters register through a simplified process to enable registered voters transfer their registration, scrutinize the register for false entries and first-time registrants. INEC should ensure strict compliance with the provisions requiring registrants to be identified by sighting of certificate of registration of birth or other valid forms of identification. Effort should be made to ensure that comprehensive copies of the register of voters are made available to Political parties, in order to ensure accountability and transparency.