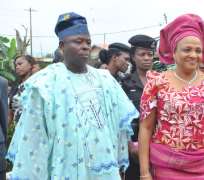 That Florence Ajimobi,the fashion designer wife of Oyo State Governor Isiaka Abiola Adeyemi Ajumobi,is a beautiful woman with a high sense of style is no news.But the beautiful Oyo First Lady is fast swimming into controversy.

The biggest one now is how she became a staunch Muslim and then reverted to her strong Christian faith all in one month.

Those who spread this tale say Gov.Ajimobi had told close confidants two months back that he was taking his wife to Saudi Arabia to perform the Hajj as a new convert whose faith in Islam is growing by the day.

Indeed,sources claim that Florence went to Hajj with her husband as the head of Oyo State women contingent.

Tongue however started to wag when the same woman who was alleged to have become a good Muslim was sighted in Israel as the head of women who went on the holy pilgrimage to Jerusalem.

Now,the opposition in Oyo State is alleging that the Governors wife must be doing money laundry otherwise,she has no reason to be travelling every other month.

Indeed the topic is a kind of comic relief in Oyo as the Governor's wife is the first from the state to convert to Islam and then revert back to Christianity within five weeks.