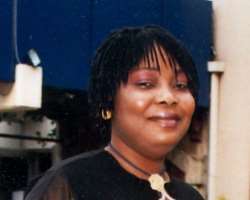 A two-hour documentary on the death of Nollywood actress and wife of Babatunde Omidina a.k.a. Baba Suwe, Monsurat Oyenike Omidina a.k.a. Omoladun Kenkelewu, has been released on video.

Speaking on the work, the CEO of Saint Martins Media, Jare Ayo Martins, said his company embarked on the project because of the late actress' contribution to the development of Nollywood, particularly the Association of Nigerian Theatre Arts Practitioners (ANTP).

Martins said that the video is a special edition of Omo Yoruba magazine on video and it consists tributes, commentaries, interviews and shots captured at the burial of the late actress.

“It is a collector's item on how Omoladun died. The work is aimed at clearing the air on the controversies surrounding her death,” Martins added.

Featuring in the video include president of ANTP, Prince Jide Kosoko, Adewale Eleso, Rammy Shitta-Bey, Laide Bakare and the widower, Baba Suwe, among others.