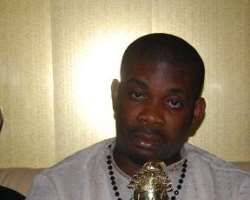 All is now clear that the 'maga don pay' crooner Kelly Hansome must have been regretting his action over recording a diss track titled igwe (komkom), on some of Nigeria music heavyweights.' Igwe KomKom' was the first single off Kelly Hansome's upcoming album titled 'Names of Noise maker', where Kelly mockingly takes aim at Wande coal on several occasions, cleverly twisting Wande coal's own lyrics in his response. Sources close to Kelly divulged that the yet to be release album is a collection of diss tracks aiming at different wave making artist in the Nigeria music scene.

In a recent chat with Kelly Hansome, he stated that “I love Mo-hits to death, I just had to say the truth in such a manner that there will be no war just because a fellow Don made a costly avoidable mistake. Wande Coal and Terry G are my boys so let there be peace. Thus says the ugly Igwe with the handsome mask on, this is just a peaceful warning from Ohaneze nde igbowe, ndewoonuo”. The purported diss track confirms past rumors suggesting tension between Kelly Hansome and members of the Mo'hits crew. Word got around, suggesting that Wande Coal's 'who born the maga' was also directed at Kelly Hansome. Penultimate week, Don Jazzy aptly replied him saying 'Silence is the best answer for a fool