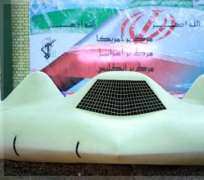 The United States said Monday that it has formally asked Iran to return an American surveillance drone that fell into Iranian hands earlier this month. Iran says it is extracting technology from the lost aircraft and will build copies of it. â€¨â€¨U.S. officials had been circumspect about the drone, which Iranian Revolutionary Guards were filmed inspecting last week. â€¨â€¨Now the authenticity of the pictured aircraft is not being disputed, and President Barack Obama and Secretary of State Hillary Clinton say the United States wants it back.

At his news conference with Iraqi Prime Minister Nouri al-Maliki, the president was asked whether the loss of the drone would undermine U.S. national security.

“With respect to the drone inside of Iran, I’m not going to comment on intelligence matters that are classified," said President Obama. "As has already been indicated, we have asked for it back. We’ll see how the Iranians respond.”

The request is understood to have been conveyed to Tehran by the Swiss government, which represents U.S. interests in Iran in the absence of diplomatic relations.

The U.S. government has not commented on the mission of the unmanned aircraft, which appears to be an RQ-170 Sentinel drone with advanced stealth technology.

News reports have said it was on a surveillance mission over Afghanistan and strayed into Iranian airspace or that it was spying on Iran’s nuclear program when ground controllers lost contact with it. Iran says it brought down the plane with a cyber attack, but aviation experts say the plane probably malfunctioned.

At a press event with British Foreign Secretary William Hague, Secretary of State Clinton said the return of the drone is unlikely.

“We very clearly are making known our concerns," said Clinton. "We submitted a formal request for the return of our lost equipment as we would in any situation to any government around the world. Given Iran’s behavior to date, we do not expect them to comply.”

Iran has sent a letter of protest to the United Nations over the drone incident, accusing the United States of provocative actions and violating international law.â€¨â€¨A member the Iran’s parliament says Iranian military experts are in the final stages of extracting data from the drone and soon will be able to copy and mass produce the plane - a claim that has been ridiculed by Western defense experts.â€¨â€¨In his comments with Secretary Clinton, British Foreign Secretary Hague said his government has not given up on engagement with Iran. â€¨â€¨But he said recent events, including last month’s mob attack on the British embassy in Tehran, suggest that at least some elements of Iran's leadership are bent on confrontation with the West.

Hague said the European Union plans to tighten nuclear sanctions on Tehran next month with tougher measures focused on Iran’s financial, energy and transport sectors. He said pressure will be increased as long as Iran’s nuclear program continues “with no adequate explanation of a peaceful purpose.”