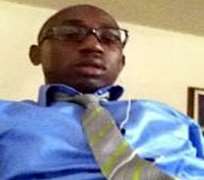 Investigation has revealed how Abia State Governor, T.A Orji, hires ‘internet hit men’ and fraudsters to do sundry dirty jobs for him, including smear attacks on opponents, and members of the media who dare publish uncomplimentary reports on the Abia helmsman whose tenure has been tagged the worst in the history of Abia. These hit men, Pointblanknews.com checks reveal, report to the “ First son”, Chinedu Orji.

The leader of the ‘online hit squad’ is Orji’s Special Adviser, E-Governance, and Strategy, one Nnaji Obed Asiegbu. Asiegbu attended St Finbars College, Akoka, Lagos, and the University of East Anglia in the United Kingdom. He has a string of I.P addresses, email addresses, and blogs he uses for his nefarious activities.

Masquerading as an online journalists and blogger, he has smeared people like former Abia Deputy Governor, Chris Akomas, who he even cloned his email to send out damaging materials; mother of former Abia state governor, Eunice Orji kalu, who he claimed is dying of AIDS; and editors of Pointblanknews.com

After weeks of diligent investigation with the help of top shelf security software, Pointblanknews.com was able to trace all the dodgy blogs and emails to some personal computers and the Static Internet Protocol, SIP, addresses in Umuahia, the Abia State capital belonging to Asiegbu and the Abia State Government.

Static IP addresses reveal such information as the continent, country, region, and city in which a computer is located, the ISP (Internet Service Provider) that services that particular computer; and such technical information as the precise latitude and longitude of the country, as well as the locale, of the computer.

He goes around different websites, posting comments on any story perceived to be against the Abia State Government, using any of his aliases and numerous email accounts.

According to findings, all the email addresses were traced to the same IP addresses of the computers he uses.

Aside from being an attack dog for Gov. Orji, Asiegbu is also a consultant for several advance fee fraudsters operating in Lagos. According to sources, for a fee, Asiegbu uses different I.P addresses to create phony blogs, email addresses, of agencies like the Nigeria National Petroleum Corporation (NNPC), Petroleum Trust Fund (PTF), Nigeria Drug Law Enforcement Agency (NDLEA), and the Central Bank of Nigeria, (CBN), Zenith Bank, and GT bank.

Asiegbu was mandated by his boss( Gov Orji), to smear the former Deputy Governor, Akomas, who fell out with Gov. Orji. Pointblanknews.com learnt that Asiegbu cloned Akomas’ email, and used it to forward and post damaging materials about Akomas unsettling his (Akomas) followers. He uses [email protected]

Asiegbu who used ninejaconnect.com to smear editors of pointblanknews.com, who have been exposing the ineptitude of Gov. Orji and large scale maladministration, and wrote on one of his phony blogsites that Mrs Kalu is at a U.S Hospital dying of HIV/AIDS. He also alleged that the Editor-in Chief of Pointblanknews.com , currently in Canada is being held in Abuja by the State Security Services (SSS) for money laundering.

Said a source “ This is what Nnaji was hired to do for Gov. Orji. He knows how to use the Internet. He clones several emails of people including opponents of the Gov. He will send emails from his computer masquerading as you, using your email, he will hack into your email and reply on your behalf causing confusion. This is criminal, and dangerous. He did same to the former deputy governor, Akomas. Anyone of his commissioners or party men who did not agree with him, is smeared using Nnaji. He doesn’t operate alone, he has other members of this Orji’s online hit squad. His son, Chinedu supervises. But funded by the Governor”

On his other activities the source said “ This young man (Nnaji Asiegbu), is known in top 419 circles in Lagos and Umuahia. He is a consultant if you want to use that word…He designs website, create blogs of agencies like NNPC, PTF, CBN, NDLEA, and even EFCC. He also clones emails of top banks. This fraudsters use these to send fraudulent letters that appear real”.