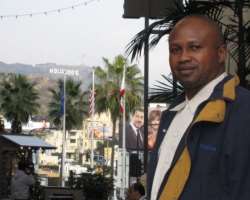 The president of Association of Movie Producers AMP, Paul Obazele, may be courting trouble without knowing what he is doing.

It is true he broke the records by being the first independent producer to organize a reality show that delivered on the promise of giving out all of 12 brand new cars to winners (courtesy of Unity Bank Plc), but the question the lucky winners and proud car owners would soon start asking Obazele is the cash prize that is supposed to come with it.

From what we gathered, the Ambassadors are yet to receive a dime from the prize money those in the know said is more than N250,000. Meaning that Obazele's Royal Pictures, the brain behind the successful reality show and the sponsors, should prepare for a war.