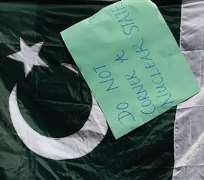 Major General Ashfaq Nadeem, director general of military operations, was also quoted by newspapers on Friday as saying that Pakistan, a strategic U.S. ally, would deploy an air defense system along the border to prevent such attacks.

Nadeem made the remarks to a Senate committee on defense on Thursday. Senator Tariq Azim, who attended the briefing, confirmed to Reuters that Nadeem had made the comments.

The Daily Times said Nadeem described the attack as a plot. Another newspaper quoted him as saying it was a "pre-planned conspiracy" against Pakistan.

"We can expect more attacks from our supposed allies," the Express Tribune quoted Nadeem as saying at the senate briefing.

U.S. and Pakistani officials have offered differing initial accounts of what happened.

Pakistan said the attack was unprovoked, with officials calling it an act of blatant aggression -- an accusation the United States has rejected.

Two U.S. officials told Reuters that preliminary information from the ongoing investigation indicated Pakistani officials at a border coordination centre had cleared the air strike, unaware they had troops in the area.

Nadeem ruled out the possibility that NATO forces may have thought they were firing on militants, who often move across the porous frontier and attack Western troops.

One newspaper reported that he told the Senate committee that militants do not leave themselves exposed on mountain tops, like the ones where the Pakistani border posts were located.

Senator Azim also quoted Nadeem as saying that NATO helicopters singled out one army major as he was crossing from one border post to another after losing communications, and this also led the military to conclude the attack was planned.

Pakistan responded to the attack by suspending supply routes to NATO forces in Afghanistan.

Idle drivers of trucks carrying fuel and other supplies to the neighboring country fear being attacked by Pakistani Taliban militants who oppose cooperation with NATO.

Militants fired a rocket-propelled grenade at such trucks in the southwestern city of Quetta in Baluchistan province on Thursday night, setting fire to 29 vehicles, police officials said.

Washington, which sees Pakistan as critical to its efforts to stabilize Afghanistan ahead of a combat troop pullout in 2014, has tried to sooth fury over the NATO incident.

President Barack Obama called Pakistan's president to offer condolences over the strike that provoked a crisis in relations between the two countries. He stopped short of a formal apology.

Pakistan boycotted an international conference in Germany on the future of Afghanistan because of the NATO attack.

U.S.-Pakistani ties were already frayed after the secret U.S. raid in May that killed al Qaeda leader Osama bin Laden.