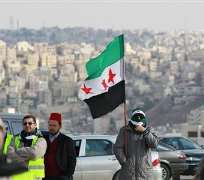 Turkey warned Syria on Friday it would act to protect itself if a Syrian government crackdown on protesters threatened regional security and unleashed a tide of refugees on its borders.

At least 14 Syrians were shot dead as protesters took the streets following Friday prayers and ahead of a general strike called for Sunday, according to a network of anti-government activists reporting events to a website based in Britain.

Other activist sources put the toll as high as 30 dead.

Nine were killed in Homs, the hub of the nine-month-old revolt, where demonstrators against President Bashar al-Assad chanted "Syria wants freedom" and "Bashar is an enemy of humanity," Qatar based Al-Jazeera television said.

Turkish Foreign Minister Ahmet Davutoglu did not say what action Ankara might take, but he made clear Turkey would not hesitate to insulate the region's security from tumult in Syria. Turkey shares a 900 km (560 mile) border with Syria.

"Turkey has no desire to interfere in anyone's internal affairs. But if a risk to regional security arises, then we do not have the luxury of standing by and looking on," Davutoglu told reporters in Ankara.

"If a government that is fighting its own people and creating refugees, is putting not only their own security at risk but also that of Turkey, then we have a responsibility and the authority to say to them: 'Enough!'" he said.

Peaceful demonstrations calling for reform began in Syria in March, inspired by the Arab Spring, but were met almost from the outset by lethal force.

About 4,600 Syrians have been killed in nine months of protest and violent state suppression, according to Syrian activists. Hundreds have fled over the border to Turkey which has established refugee camps.

MISTAKES
President Assad says some "mistakes" may have occurred but casualties have been overwhelmingly from the security forces, targeted by "armed terrorist gangs" who are motivated and directed by unnamed foreign influences.

Syria has been hit by United States and European Union economic sanctions and suspended from the Arab League which is also threatening to impose sanctions.

Russia and China, however, have effectively blocked any similar move at the United Nations and Moscow is warning the West not to interfere in the affairs of its longtime Arab ally.

demonstrations in southern Deraa province, calling for the overthrow of the government, on what protesters are calling the "Friday of the Strike of Dignity" planned over the weekend.

Security forces fired into a crowd outside the mosque in Al-Qusayr in Homs province, the Observatory said. In Homs city, one person was killed by gunfire from a checkpoint. Troops surrounded protesters as they came out of two mosques in the eastern city of Deir al-Zor, and two children were killed in districts of Homs, the activist website reported.

State television also reported violence but gave a different account. It said a girl was shot by "terrorists" in Deraa and civilians wounded by "terrorist armed groups."

UN WANTS ACCESS
Davutoglu has proposed that contingency plans be made for a buffer zone along the Syrian border should violence escalate to the point where a mass exodus is threatened.

The United Nations said it was impossible to assess the situation until Damascus admits humanitarian relief teams.

"I repeat my call to the Syrian government to really let us in," said Valerie Amos, U.N. Under-Secretary-General for Humanitarian Affairs and Emergency Relief, in Stockholm.

"If, as the government say, they have nothing to hide, then I think allowing us in to see that is the case and to do a proper assessment of what the implications of this are for the people of Syria is absolutely critical," Amos said.

Syrian National Council leader Burhan Ghalioun said he had pressed the leader of the Free Syrian Army, an umbrella group of armed rebels, to cease offensive operations that could provoke civil war.

"We want to avoid a civil war at all costs," he told Reuters in Vienna.

Assad this week denied all responsibility for civilian deaths and said he had given no shoot-to-kill order.

NATO wants him to step down. But Russia, China, Iran and Brazil, among others states, say the West should not interfere.

It said they admitted making and planting bombs but did not elaborate on their alleged political motive for such attacks.