UK Isolated As Europe Moves Ahead On Fiscal Union 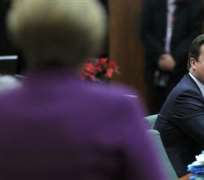 Europe divided on Friday in a historic rift over building a closer fiscal union to preserve the euro, with a large majority of countries led by Germany and France agreeing to forge ahead with a separate treaty, leaving Britain isolated.

Twenty-three of the 27 leaders agreed to pursue tighter integration with stricter budget rules for the single currency area, but Britain said it could not accept proposed amendments to the EU treaty after failing to secure concessions for itself.

After 10 hours of talks, all 17 members of the euro zone and six countries that aspire to join resolved to negotiate a new agreement alongside the EU treaty with a tougher deficit and debt regime to insulate the euro zone against the debt crisis.

Sweden, Hungary and the Czech Republic said they needed to consult their parliaments.

"Not Europe, Brits divided. And they are outside of decision making. Europe is united," Lithuanian President Dalia Grybauskaite said in blunt English on arriving for the second day of the bloc's eighth crisis summit this year.

European Central Bank President Mario Draghi called the decision a step forward for the stricter budget rules he has said are necessary if the euro zone is to emerge stronger from two years of market turmoil.

"It's going to be the basis for a good fiscal compact and more discipline in economic policy in the euro area members," Draghi said. "We came to conclusions that will have to be fleshed out more in the coming days."

German Chancellor Angela Merkel said she was very satisfied with the decisions. The world would see that Europe had learned from its mistakes and avoided "lousy compromise", she said.

Merkel, Europe's most powerful leader, said she had not given up hope that Britain would eventually agree to change the EU treaty to anchor stricter budget discipline.

Active ECB support will be vital in the coming days with markets doubting the strength of Europe's financial firewalls to protect vulnerable economies such as Italy and Spain, which have to roll over hundreds of billions of euros in debt next year.

Irish Europe Minister Lucinda Creighton said Dublin and many other member states expect the central bank to take a more pro-active approach to the debt crisis in the weeks ahead. Traders said the ECB bought Italian bonds on Friday to steady markets.

Creighton also said there was a 50/50 chance that Ireland would have to hold a referendum on ratifying a fiscal union treaty. Irish voters have rejected EU treaties twice in the last decade in plebiscites, holding up their entry into force, only to reverse their vote later under strong European pressure. Voters in any referendum this time will cast their ballots in the knowledge that Ireland is receiving an EU bailout.

The euro, shares and commodities fell in Asia because of growing doubts about whether Europe can forge a convincing financial firewall to arrest contagion in bond markets, but the currency regained ground in Europe and European stocks were narrowly higher in feverish trading.

Asked if the euro was safe now, Polish Prime Minister Donald Tusk said: "I'm not sure."

In the run-up to the summit, Draghi's use of the term "fiscal compact" had spurred investor hopes that the ECB would engage in massive buying of bonds from distressed euro zone states. But he discouraged that interpretation on Thursday.

ECB policymaker Ewald Nowotny, asked on Friday what more the ECB could do to support the euro zone, said: "I think intelligent people always think over lots of things, but it is about what we decided yesterday.

BRITAIN OUTSIDE?
Merkel and French President Nicolas Sarkozy had wanted to get the whole EU to agree to change the Lisbon treaty so that stricter budget and debt rules for eurozone states could be enshrined in the bloc's basic law.

But Britain, which is outside the euro zone, refused to back the move, saying it wanted guarantees in a protocol protecting its financial services industry, roughly one-tenth of the country's economy. Sarkozy described Cameron's demand as unacceptable.

The rift may increase pressure from Eurosceptics within Cameron's Conservative party and outside it for Britain to hold a referendum on leaving the EU, which it joined in 1973. The prime minister strongly opposes such a course, which he has said would be disastrous for British interests.

Sarkozy and Merkel said the intention was to forge an intergovernmental treaty among the euro zone countries and any others that wanted to join. They indicated that could be up to 25 countries in all, with only Britain and perhaps Hungary left outside the tent for now.

"This is a summit that will go down in history," said Sarkozy. "We would have preferred a reform of the treaties among 27. That wasn't possible given the position of our British friends. And so it will be through an intergovernmental treaty of 17, but open to others."

Herman Van Rompuy, the president of the European Council and the summit chairman, focused on the success in securing agreement for tighter fiscal limits, including the need for countries to bring budgets close to balance.

"It means reinforcing our rules on excessive deficit procedures by making them more automatic. It also means that member states would have to submit their draft budgetary plans to the (European) Commission," he said.

On treaty change, Van Rompuy said the new treaty would involve the euro zone and at least six other countries, with two more waiting for a mandate to participate.

"An inter-governmental treaty can be approved and ratified much more rapidly than a full-fledged treaty change, and I think speed is also very important to enhance credibility," he said.

But it could still take months of wrangling, with countries like Finland and Slovakia opposing a Franco-German drive to take decisions on future bailouts by an 85 percent supermajority to avoid being taken hostage by a single small country.

LAST-CHANCE SALOON?
In a meeting billed as a last chance to save the euro, with financial markets unconvinced by policymakers' efforts to tackle the region's problems so far, the leaders also took several decisions on the permanent bailout fund, the European Stability Mechanism, which will come into force a year early in July 2012.

The ESM's capacity will be capped at 500 billion euros ($666 billion), less than had been suggested was possible before the summit, and the facility will not get a banking license, as Van Rompuy originally had proposed, due to German opposition.

It also was agreed that EU countries would provide up to 200 billion euros in bilateral loans to the International Monetary Fund (IMF) to help it tackle the crisis, with 150 billion euros of the total coming from the euro zone countries.

"We can be very pleased at the result," IMF Managing Director Christine Lagarde said as she left the summit.

Cameron's decision to stay out of the treaty-change camp could spell problems for Britain.

The danger is that if a large majority of EU countries do push ahead with deeper integration, it could involve changes to the single market and financial regulation, both of which could have a profound impact on the British economy.

"Cameron was clumsy in his maneuvering," a senior EU diplomat said. It may be possible that Britain will shift its position in the days ahead if it discovers that isolation really is not a viable course of action, diplomats said.

At the same time, if Britain does stay out, not only could it mark an irrevocable split with the European Union, which it joined nearly 40 years ago, but it will leave the rest of the EU and euro zone to institutionalize a 'two-speed' Europe.

Earlier, the plight of Europe's banks was thrown into sharp relief. The European Banking Authority told them to increase their capital by a total of 114.7 billion euros, significantly more than predicted two months ago.

A Reuters poll of economists found that while 33 out of 57 believe the euro zone will probably survive in its current form, 38 of those questioned expected this week's summit would fail to deliver a decisive solution to the debt crisis.